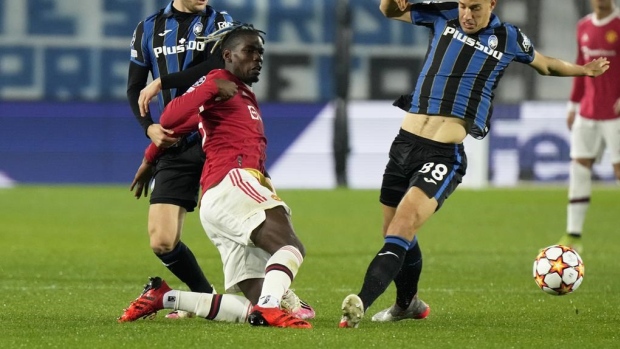 MANCHESTER, England (AP) — Paul Pogba’s recovery from a thigh injury has been slower than expected and the France midfielder might not return to training for up to a month, according to Manchester United manager Ralf Rangnick.

Pogba pulled up during training on international duty with France in early November. Ole Gunnar Solskjaer, who was United manager at the time, predicted Pogba would be back “just after Christmas” and Rangnick, Solskjaer's successor, said on Dec. 10 that he was four weeks away from a return to action.

Rangnick is now expecting a longer layoff for Pogba, whose contract is due to expire at the end of the season.

“Well, a week ago I was told that it would take another four or five weeks,” the interim manager said of Pogba ahead of an FA Cup match against Aston Villa on Monday.

“He’s not training with the team as yet," Rangnick continued. "As far as I know from the medical department, it will last another three weeks, four weeks and once he is then fit for training that does not necessarily mean he is also match fit. It will probably take a couple of weeks (more) until he is really able to compete for the first team.”

Pogba’s absence comes at a time when United is struggling to get the right balance in midfield under Rangnick, who has implemented a 4-2-2-2 formation since arriving.

“Well, it doesn’t help if there is a profile missing,” said Rangnick, who saw United's midfield outplayed in a 1-0 home loss to Wolverhampton on Monday. “We need to and want to work with the players we have. We showed we are able to keep clean sheets with this group of players."

But it's what United is doing “with and without the ball,” that concerns Rangnick.

“We had too many giveaways, too many turnovers in that game and this is also an issue we spoke about with the team that we shouldn’t make it too easy to the other team to get in possession of the ball, especially when once we have the ball it’s also about responsible decision-making, making the right decision at the right moment.”

United plays Steven Gerrard’s Villa in the third round of the FA Cup.