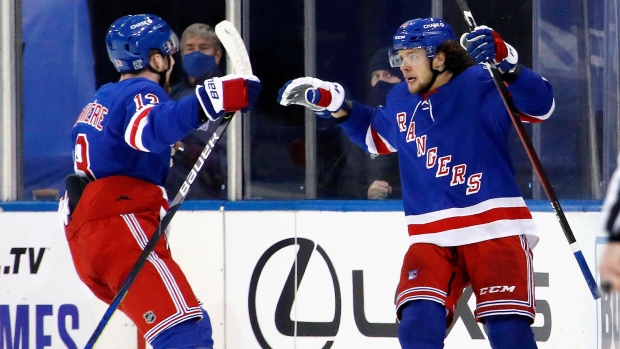 NEW YORK — Pavel Buchnevich and Artemi Panarin each scored twice and Alexandar Georgiev stopped 23 shots for his fifth career shutout, leading the New York Rangers to a 5-0 win over the Islanders on Saturday night.

Kaapo Kakko also scored as the Rangers bounced back for their first victory two nights after being blanked 4-0 by the Islanders in the season opener.

“Today was a much better defensive game from us,” Georgiev said. “The score dictated a lot of the game because we were leading from the start. We managed to play really smart hockey, let the chances come to us and not rush anything.”

Ilya Sorokin had 27 saves in his NHL debut for the Islanders, getting the start after Semyon Varlamov was hit near the throat by a shot from Cal Clutterbuck in warmups. Cory Schneider, who signed a one-year contract with the Islanders this month, dressed as the backup.

“We hung him out to dry,” Islanders coach Barry Trotz said of Sorokin. “We put him in a tough circumstance. … Turnovers, bad plays, poor execution, we were junk today.”

The Islanders went 0-4 on the power play and Mathew Barzal was called for three minor penalties.

Buchnevich opened the scoring 2:12 into the game after Mika Zibanejad stole the puck from Islanders defenceman Noah Dobson in front of the Islanders’ bench. It was the Rangers’ first goal of the season.

Panarin converted a breakaway to double the Rangers’ first-period advantage with 7:14 left. Brendan Smith blocked a shot in the defensive zone then delivered a stretch pass in his season debut to spring the newly selected alternate captain.

“The right words were spoken in the locker room and it was a good lesson for all of us,” Panarin said in reference to the loss Thursday. “We changed some things in our game, and we were happy with the outcome.”

Buchnevich added his second of the contest with a sharp-angled wrist shot from the left faceoff dot at 5:57 of the second. Islanders defenceman Scott Mayfield struggled to control a rolling puck after getting tied up with an official.

“He is working hard, he wants to get better, he is coachable, he is just really growing up,” Rangers coach David Quinn said about Buchnevich. “I am just so happy for him that he is getting rewarded statistically but he is doing all these other things he wasn’t doing two years ago. Its just fun to watch people grow.”

Phillip Di Giuseppe set up Kakko with 4:36 left in the middle period to make it 4-0. Dobson struggled to exit the Islanders’ defensive zone and the Rangers took advantage of the turnover. Filip Chytil also assisted on the play.

Panarin capped the scoring on the Rangers’ seventh power play of the game with 4:04 remaining off a pass from Adam Fox. Buchnevich had an assist for his third point of the game.

“I think its just a really bad outing,” Islanders captain Anders Lee said. “It’s not representative of how we want to play. Turned a few too many pucks over, took too many penalties, they played a much better game than we did.”

Islanders defenceman Ryan Pulock caught a puck up high in the first period. He immediately left the ice and headed toward the locker room. He did return to start the middle frame and totalled 21:23 of ice time.

Islanders: Host Boston in their home opener on Monday night.

Rangers: Host New Jersey on Tuesday night in the finale of a season-opening three-game homestand.