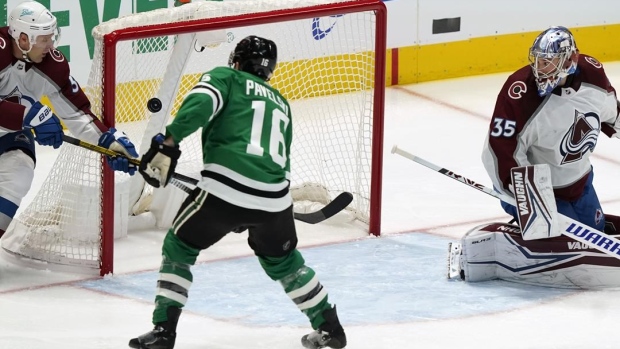 DALLAS (AP) — Joe Pavelski scored twice in 20 seconds in the opening 1:31 to reach 400 career goals, and two goaltenders combined to shut down the NHL’s highest-scoring team Friday night, as the Dallas Stars beat the Colorado Avalanche 3-1.

Denis Gurianov added a power-play goal for Dallas, which has won its last five home games and five of six overall.

Cale Makar scored at 16:39 of the third period with the extra skater on the ice for Colorado, which had its six-game winning streak halted. Makar has goals in a franchise-record five straight games for a defenseman.

Jake Oettinger made 33 saves and improved his record to 4-0-0 including Dallas’ last three games. Oettinger was replaced by veteran Braden Holtby during the last 7:22 of the second period after being struck in the head by Nicolas Aube-Kubel.

Pavelski is the 10th American-born NHL player to score at least 400 goals. The leader is Mike Modano, who scored all but four of his with 561 goals with the Minnesota-Dallas franchise.

“We bent there a little bit in the third period, but we didn’t break,” Stars coach Rick Bowness said. “They’re probably the fastest team in the league, so we knew they were going to make a big push at it.”

Oettinger returned for the third period after adhering to the NHL protocol regarding hits to the head – passing a base-line concussion test. And what a period it was with the Avalanche outshooting Dallas 20-1 and finally scoring.

Holtby, who leads Stars goalies with eight starts had missed the previous five games with a lower body injury. He finished with four saves.

The Avalanche entered leading the league by averaging 4.06 goals per game. Darcy Kuemper stopped 19 shots and had his personal five-game winning streak — the longest active run in the NHL — stopped.

“We weren’t ready to start the game on time,” said Avs coach Jared Bednar, who on Wednesday became Colorado’s leader in career coaching wins with 194. “They came out with a lot of jump, were more competitive early. We were lucky it was only two goals.”

Each team will complete a back-to-back on Saturday night.

Pavelski first scored at 1:12 when he was left alone at the far post to Kuemper’s right and converted a pass by Jason Robertson from the opposite circle. At 1:31, Pavelski dipped his right knee as he skated on net, controlled a pass from Roope Hintz on his backhand, shifted the puck to his forehand and scored from between the circles.

Gurianov collected a rebound in the low slot off a shot by Miro Heiskanen and sent a wrister to Kuemper’s right for his second goal in two games.

Oettinger left at 12:38 of the second period when Aube-Kubel’s right elbow caught him in the head as Aube-Kubel charged the net along the goal line.

Oettinger, 22, went into the game leading the NHL with a 1.29 goals-against average in four games since being called up from Texas of the American Hockey League on Nov. 13.

MAKE IT FIVE FOR MAKAR

In setting the franchise record for a defenseman with goals in five consecutive games, Makar was somewhat held in check. He scored two goals in two of the previous three games and has seven in five games.

“It would feel a lot sweeter if we got the win tonight,” he said of the milestone.

Heiskanen, a defenseman, leads Dallas with 15 points. … Hintz has 10 points in his last 10 games after being limited to one assist in his first 10 games. … The Stars have scored power-play goals in four straight games and 10 of the last 11. The Avs came in having scored 10 power-play goals in six games, but went 0 for 3 with the man-advantage with two total shots on goal. … Colorado’s Nazem Kadri, fourth in the NHL with 25 points going into play, had a 10-game points streak snapped.

Stars: At Arizona on Saturday night.