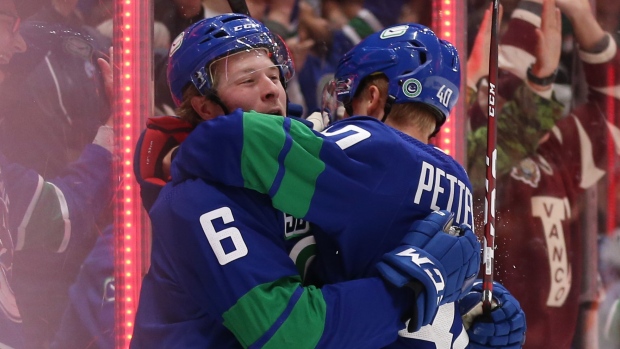 VANCOUVER — Tanner Pearson scored in the shootout to power the Vancouver Canucks to a 3-2 home victory over the Philadelphia Flyers on Saturday.

The left-winger beat Philly's Carter Hart five-hole in the third round to secure the win.

Brock Boeser and Pearson both scored for the Canucks (2-2-0) in regulation, and Chris Tanev registered a pair of assists.

Carsen Twarynski and Oskar Lindblom scored for the Flyers (2-0-1).

Hart stopped 22-of-24 in the losing effort while Jacob Markstrom had 29 saves for Vancouver.

The loss was Philadelphia's first of the season and marked the Flyers' first game in North America this season after they opened the year in the Czech Republic as part of the NHL's global series.

The Canucks got on the board just over five minutes into the game after J.T. Miller picked off the puck behind the Flyers' net. He got it up to Tanev at the blue line and the veteran defenceman fired off a long shot.

Hart made the save but Boeser was there to corral the rebound. His slap shot beat the young Philly goalie and put Vancouver up 1-0.

The Flyers got the equalizer 3:14 into the second frame.

Justin Braun sent a cross-ice pass to Twarnyski alone in the Canucks' end. The left-winger streaked towards Vancouver's net, sending a rocket past Markstrom stick side. Braun and Travis Sanheim earned assists on the play.

The Canucks retaliated just over a minute later when Tanev collected the puck near the blue line and sent down a long shot. Pearson deflected it in from down low, allowing Vancouver to re-take the lead.

Philly came out strong in the third, peppering Markstrom with a barrage of shots early.

One attempt by James van Riemsdyk looked promising, skimming through the crease before Markstrom, flat on his belly, got a piece of it with his glove and directed the puck out of harm's way.

The Flyers outshot the Canucks 9-1 in the first five minutes of the third period.

Lindbolm finally put away Philly's second goal of night with a power-play marker 14:58 into the frame after Vancouver defenceman Jordie Benn was called for interference.

It was the first power-play goal the Canucks have given up this season.

Sanheim rang a shot off the post with about 50 seconds left in the game but the Flyers couldn't avoid extra time.

Both sides had opportunities in overtime, including a great chance for Vancouver with just over a minute to go when Philly's Sean Couturier lost his stick and Bo Horvat got a bit of a breakaway.

The centre couldn't burry the puck on the ensuing shot, but Couturier was called for throwing his stick, giving the Canucks a man advantage.

The Canucks will wrap up a three-game home stand on Tuesday when they host the Red Wings. Philadelphia continues its western swing the same night, battling the Flames in Calgary.

NOTES: The Canucks had 13 giveaways in the contest, compared to just four from Philly. ... Boeser's goal was his first of the year. The right-winger had 26 goals and 30 assists in 69 outings last season.