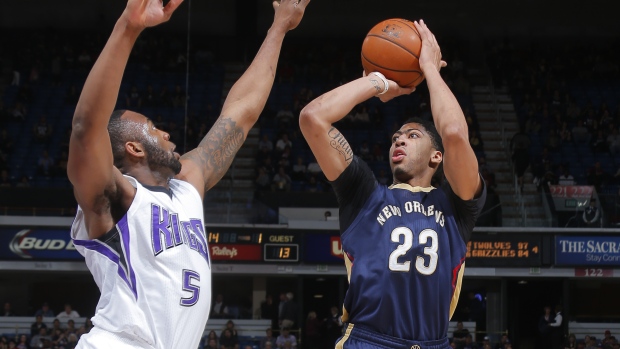 NEW ORLEANS - The New Orleans Pelicans have decided to shut down All-Star forward Anthony Davis for the rest of this season, and his future with U.S. Olympic team for this summer's Rio Games is in doubt as well.

Coach Alvin Gentry said Sunday that Davis needs to repair a recent knee injury and a lingering shoulder problem that has bothered him for much of the season.

With New Orleans virtually eliminated from playoff contention, Gentry said the club is taking a long-term approach to Davis' injuries and that shutting him down now should ensure his return by next training camp.

Gentry said Davis, who was not available to speak with reporters on Sunday, is disappointed, but added, "He's a smart kid and he understands that it's better to go ahead and any problems that you have, you get them taken care of now and you've basically got seven months before training camp starts again."

"That gives you a big window to do whatever you have to do and move forward with it," Gentry added.

Davis left New Orleans' previous game — a loss to Portland on Friday night — shortly before halftime with a left knee injury that appeared to be caused by a collision with Trail Blazers guard C.J. McCollum and Pelicans guard Jrue Holiday while Davis was setting a screen. Gentry said Davis has been playing with his shoulder injury nearly the entire season, during which he averaged 24.3 points, 10.3 rebounds and 2.1 blocks.

Asked if Davis' injury would prevent him from playing for the United States in the Summer Olympics, Gentry responded, "That I don't know, but if I was a betting man, probably so."

Davis, a fourth-year pro who turned 23 this month, has embraced opportunities to represent the United States in international competitions. He was a reserve for the U.S. team that won the gold medal at the London Games in 2012. When Team USA won the 2014 FIBA World Cup, Davis emerged as one its top players, ranking third on the team in scoring with 12.3 points per game, second in rebounds with 6.6 and first in blocks with 2.1.

Gentry did not specify precisely what Davis' injuries were. Team spokesman Matt Ryan said both injuries would require corrective medical procedures, but said he could not immediately specify what doctors had planned.

Team officials said Davis was expected to discuss his health and off-season plans after Monday's scheduled practice at team headquarters.