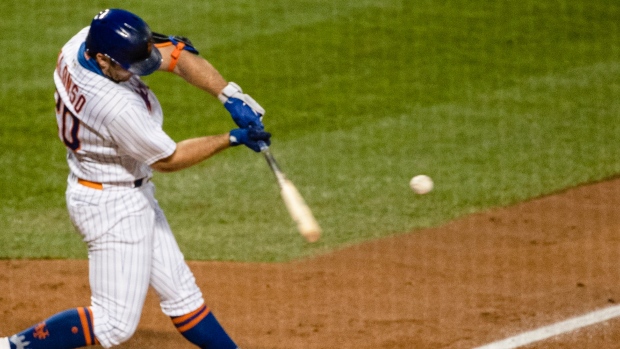 NEW YORK — Pete Alonso and Dominic Smith had back-to-back RBI doubles in a four-run first inning and hit consecutive homers in a five-run sixth, leading the New York Mets to an 11-6 win over the Washington Nationals on Wednesday night.

The fourth, fifth and sixth batters in the Mets’ lineup, Michael Conforto, Alonso and Smith, went 7-for-11 with eight RBIs, eight runs scored, three walks and a hit batsman in 15 plate appearances.

“Those guys four through six in the lineup, they did great,” Mets manager Luis Rojas said.

Alonso, the reigning NL Rookie of the Year and major league home run champ, entered Wednesday hitting just .197 with two homers and seven RBIs. He was out of the lineup for the first time this season on Tuesday — the same day he told Rojas he felt he was beginning to snap out of his slump.

The Mets scored four runs or fewer in 12 of their first 18 games.

Conforto preceded Alonso with a two-run double in the sixth and Smith had a run-scoring groundout in the eighth. Nimmo finished with three hits.

“This was such a complete win, we had contributions from everybody,” Alonso said. “I think we’ve got more to come. It’s still early. We’ve still got two-thirds of the season left.”

Seven pitchers combined on a 10-hitter for the Mets, who lost the first two games of the four-game series. Jeurys Familia was awarded the win after striking out four over two innings. Robert Gsellman, making his first start since Sept. 27, 2017, allowed three runs in two innings.

Juan Soto went 3-for-4 and accounted for the Nationals’ first four runs with a pair of homers — a 466-foot blast to right that cleared the second deck in the first inning and an opposite field shot to left in the sixth. The first homer was the longest of Soto’s career, surpassing the 463-footer he hit beyond the home run apple in centerfield in Monday’s opener.

“I just feel really good at the plate,” Soto said.

It was the sixth two-homer game for the 21-year-old Soto. He has 60 career homers, tied with Hall of Famers Frank Robinson and Ken Griffey Jr. for the most by a player before his 22nd birthday.

“This guy is unbelievable,” Sanchez said. “This guy is going to be an amazing superstar.”

“He’s not locating any of his pitches,” Nationals manager Dave Martinez said. “He’s falling behind. I haven’t seen him like that. We’ve got to get him right.”

The Mets’ middle infield combination of second baseman Luis Guillorme and shortstop Andres Gimenez had another impressive night Wednesday. In the third, Gimenez ranged behind the bag to rob Adam Eaton of a hit before the duo began an inning-ending 4-6-3 double play — the fourth time in two games they have teamed up to record the first out of a double play. In the fourth, Guillorme snared a liner by Asdrubal Cabrera and fired to first to double up Howie Kendrick. And in the second, Nimmo robbed Kurt Suzuki of an extra-base hit with a leaping catch at the wall in centre.

Nationals manager Dave Martinez, who was hospitalized last September because of a heart issue, says he’s been careful as can be during his team’s first road trip of 2020. “Spend a lot of time looking out the window in my room,” Martinez said. “Thank goodness it’s ‘Shark Week,’ so I’ve been watching Shark Week all morning. ... I’ve got to do the best I can to keep myself healthy.”

Mets: IF Jed Lowrie (left knee) received a series of PRP injections in hopes of alleviating the discomfort he’s feeling. Lowrie signed a two-year deal last January but was hitless in seven at-bats in 2019 and has yet to play this season. … 2B Robinson Cano (left groin) was scheduled to play a simulated game Wednesday. The Mets hope he can return when eligible on Friday. … RHP Michael Wacha (right shoulder inflammation) threw from 75 feet on Tuesday. Manager Luis Rojas said Robert Gsellman is being stretched out to occupy Wacha’s rotation spot. … SS Amed Rosario (stomach) missed his second straight game.

Nationals: LHP Sam Freeman (elbow) exited while pitching to Jeff McNeil in the fourth inning. Freeman motioned to the dugout immediately after McNeil fouled a pitch off and left with a trainer after a brief consultation. Martinez said Freeman said he felt a pop and said the injury was to the flexor strain, Freeman will undergo an MRI Friday. … OF Victor Robles, who was hit on the knuckle by a pitch in the fifth inning, was lifted for pinch-hitter Michael A. Taylor in the seventh. Robles is day-to-day. … World Series MVP Stephen Strasburg is still dealing with a nerve issue in his pitching hand but remains in line to make his next scheduled start Friday at Baltimore. … RHP Will Harris (groin) is expected to be activated from the 10-day IL on Thursday.

Mets: Rookie LHP David Peterson (2-1, 3.78 ERA) is scheduled to face the Nationals for the first time.