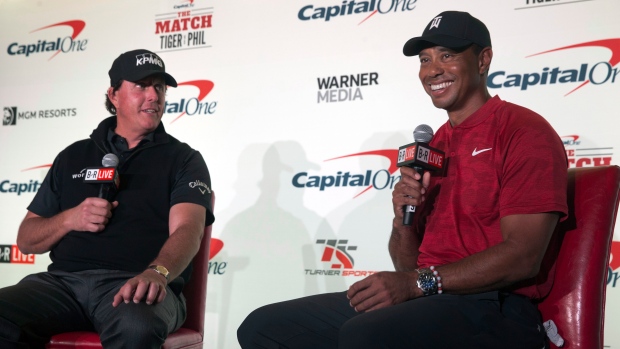 Could it be? Is it possible? Will it happen?

Phil Mickelson put golf social media on high alert Sunday when he hinted that he might take on Tiger Woods in a match with a bare-bones broadcast.

When asked by a Twitter user named Chris Yurko if he’d consider taking on Woods in a match to relieve the barren sports landscape caused by the COVID-19 pandemic, Lefty responded: “Working on it.”

When asked by another user if he was just teasing golf fans, Mickelson doubled down: “I don’t tease. I’m kinda a sure thing.”

A Tiger-Phil match would reprise their first head-to-head battle that took place in Las Vegas in November of 2018.

That match received less-than-stellar reviews despite it ending in a playoff under the lights with Mickelson earning a $9 million payday. The golf wasn’t very good, and the much-anticipated needling never happened. It also was hampered by technical problems on the streaming service.

Prior to the pandemic, there was talk of a second matchup, with Peyton Manning joining Mickelson and Woods teaming up with Tom Brady in a team competition. There’s no word whether the two NFL legends are in the picture for this latest endeavour.

That’s just one of many questions left unanswered at this point. Others include: Where and when would this take place? Is Woods healthy enough to compete? How would it be broadcast?

Even with so many uncertainties, just the thought of this possibly happening is enough to provide some excitement into the daily conversations of golf fans.