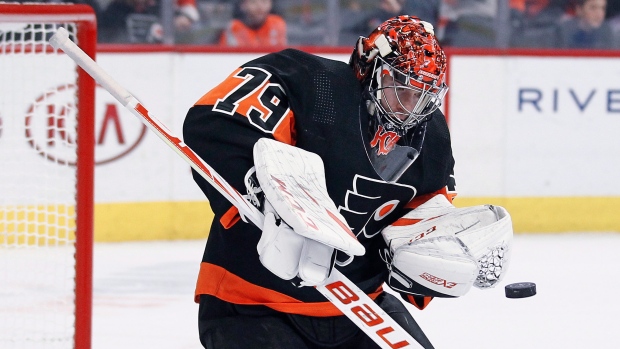 The Philadelphia Flyers will be without their starting goalie for the next while as Carter Hart will be sidelined for the next 2-3 weeks with a lower right abdominal strain, the team announced on Wednesday.

#Flyers say G Carter Hart will miss 2-3 weeks with a right lower abdominal strain. It's caused a ripple effect on their cap. To recall G Alex Lyon, #Flyers had to send Joel Farabee to AHL and place Chris Stewart on waivers.

The Flyers have also recalled goalie Alex Lyon from the AHL, sent winger Joel Farabee to the minors and placed forward Chris Stewart on waivers.

The Flyers currently hold the second wild-card spot in the Eastern Conference.