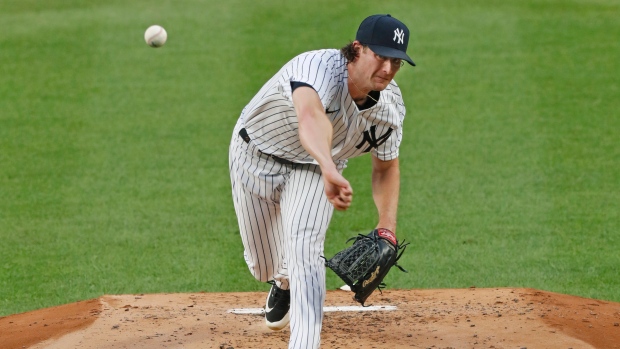 NEW YORK — Philadelphia had not taken the field since July 26. Jake Arrieta had not been on a mound for a game that mattered since last Aug. 11.

And the big return came against no less than the surging New York Yankees and Gerrit Cole, baseball's hottest pitcher, who was making his debut in pinstripes.

“It seems like the deck is stacked against us,” Arrieta said after the Phillies fell behind by five runs and lost 6-3 on Monday night. "But that doesn't matter. This is a situation that’s been difficult for every team to deal with."

Aaron Hicks added an RBI double later in the inning for a 3-1 lead, and Gio Urshela blew open the game with a three-run homer in the sixth on a changeup from Deolis Guerra that landed in the visitors’ bullpen in left-centre.

Both New York homers off Arrieta were Yankee Stadium specials: Gardner’s 351 feet on a changeup, LeMahieu’s 352 feet on a sinker.

“Both not very good pitches, to be honest,” Arrieta said. ”Whether it goes in the first or second row or 475 feet, they they’re still home runs."

Philadelphia, which dropped to 1-3, had not played since an 11-6 loss to Miami at Citizens Bank Park on July 26. A COVID-19 outbreak among the Marlins started that weekend that led to 21 infections in Miami’s travelling party, including at least 18 players.

Back in June, seven Phillies players and five staff tested positive at the training complex in Clearwater, Florida.

“After we were hit by this the first time, we handled it really well,” Arrieta said. “We’ve been following the protocols and we had two false positives which kind of set us back a little bit, but none of the players testing positive in the past several weeks, it just shows that we’re doing everything we can to make sure our guys stay healthy.”

Arrieta gave up three runs and seven hits in five innings with four strikeouts and no walks among 78 pitches.

After the sixth inning, the game was delayed by rain for 67 minutes. More rain is ahead Tuesday, and the second of two games in the Bronx was postponed and rescheduled as part of a doubleheader for Wednesday when a series opens in Philadelphia. The Yankees will be the home team in the first game of the twinbill, which starts a stretch of 56 games in 54 days for the Phillies.

Arrieta thought about the upcoming toll on Philadelphia's position players.

“That’s a heavy workload for them,” he said. “And being able to get the appropriate amount of rest at night, getting some good sleep, being able to recover for those guys, as well, is really important.”

Cole (3-0) allowed one run and five hits, struck out four and walked one. He has won 19 straight regular-season decisions, the sixth-longest streak behind Carl Hubbell (24), Roy Face (22) and Rube Marquard, Roger Clemens and Arrieta (20 each).

Philadelphia reported to Citizens Bank Park on Monday to undergo another in a series of 10 days of saliva checks, left at 11:30 a.m. for the bus trip to New York and arrived two hours later at Yankee Stadium. Because of Tuesday’s postponement, the Phillies headed home after the game without having checked into their hotel.

Players were not allowed to work out at their ballpark on Thursday and Friday, then resumed group training last weekend.

“We didn’t really know as the week went on what the next day would hold,” first baseman Rhys Hoskins said. “So I took it home. I’ve been hitting at home during the quarantine, anyway.”

For players used to 162 games over 186 days in a normal season, the layoff was jarring — especially after the training interruption from March 12 to July 3. Players didn’t have any input on whether to play the series finale against Miami.

“Obviously, the stop and start in a sport where we’re not used to starting and stopping and then starting again is something that I think some of us were concerned about,” said Hoskins, the team player representative with the union. “But I think when last Sunday hit, we kind of knew that this might have been something that would be in our future.”

Girardi was given a video tribute after the third inning and Phillies shortstop Didi Gregorius (1 for 4) received one after the fourth. Girardi managed the Yankees from 2008-17 and Gregorius was their shortstop from 2015-19.

Philadelphia got RBI singles from Adam Haseley off Brooks Kriske in the seventh and Jean Segura against Luis Avilán in the eighth. Zack Britton pitched a perfect ninth for his fourth save.

RHP Aaron Nola (0-1) and RHP Zack Wheeler (1-0) start Wednesday for the Phillies. LHP JA Happ (0-0) will start one of the games for the Yankees.