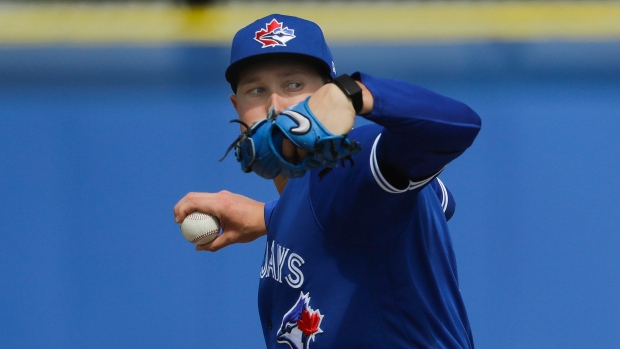 The 23-year-old right-hander has all the makings of a staff ace. The anticipation of his call-up to the majors is not that dissimilar to that of Vladimir Guerrero Jr. last season. And that means the Blue Jays are going to have to make sure they maximize his days in a Toronto uniform.

“Because of the upside, because of the potential for him to be a workhorse – and we feel strongly that he will be – we are entirely focused on his development,” Jays general manager Ross Atkins said of the club’s plans to manage the young gun.

“And a big part of his development is ensuring that he has every chance to increase that workload in a logical and smart way.”

“We think Pearson is going to be great. But because he only threw 101 innings in 2019, we need to manage his workload in 2020. The workload issue is what we are calling his developmental need. And developmental need is code for the reason we will be sending Nate to the minor leagues at the start of the season. Just like the Vladimir Guerrero Jr. situation last season, we want to make sure we maximize our top prospects’ time in a Blue Jays uniform. This allows us to do that without being subject to a grievance from the players association.”

Expect Pearson to throw somewhere between 130-to-140 innings this year. The Jays will want him to finish the season pitching through the month of September in the major leagues so he acclimates himself to the extra month of the season. Therefore, they will likely manage his innings early in the season as a minor leaguer. I would expect that if Pearson throws well in the minors, he will be called up in mid-May.

I know fans would like to see him on the roster on Opening Day (March 26 against the Boston Red Sox at Rogers Centre) but that would mean that he would be a free agent after the 2025 season. By waiting to promote him on or after April 10, Pearson will not be a free agent until after the 2026 season.

I fully believe that once he gets to the majors he will never look back.

Jays starter Matt Shoemaker has worked his way back to the mound after blowing out his ACL last season. He looked very good in his spring debut on Monday, throwing 2.2 innings, allowing one hit and striking out five with no walks in a 4-0 win over the Pittsburgh Pirates.

At the age of 33, what you see is what you get with Shoemaker. His stuff isn’t overpowering. He has to work his sequence of pitches and keep hitters off balance with his change of speeds and location. He is a wily veteran and a good leader who will serve as an example to the young pitchers on the staff.

At best, Shoemaker is a No. 3 starter but that’s just fine as the Jays don’t really need him to be more. Chase Anderson, Tanner Roark and Shoemaker are all very similar. They are a collection of No. 3 or No. 4 starters. Once Pearson joins the club as an impact front-end starter, they will slot back into more appropriate roles on the staff.

Shoemaker hasn’t thrown 80 innings in a season since 2016, so the club does have to keep an eye on his workload. But because he is 33, Toronto doesn’t need to be overly protective. However, they will have to monitor his health.

Yelich about to take hometown discount

The Milwaukee Brewers and star outfielder Christian Yelich are reportedly close to agreeing to a seven-year contract extension that will add about $190 million to his current contract, making it a nine-year deal valued at about $215 million.

The MLBPA is probably not overwhelmed by the deal. Sure, they love when clubs spend more than $200 million on players but the annual average value of the extension is nowhere near Yelich’s value.

He had two years remaining on his past contract which was to pay him $12.5 million in 2020 and $14 million in 2021. The new deal voided the option the club had at $15 million for 2022. The seven-year extension averages between $27 million and $28 million a year. Three years from now, when he would have been a free agent under the old deal, Yelich could have easily been worth $35 million to $38 million a year. This is a major hometown discount.

The players’ union wants to keep driving up players’ salaries, but players have choices, too. Yelich chose to stay where he is happy and comfortable for less money.

The challenge for the Brewers now will be to field a competitive team with one player making such a large percentage of the payroll. This is a major endorsement of the front office from the ownership that they believe GM David Stearns and his staff can continue to develop players who can help play around Yelich.

Yelich could play for my team any day of the week.

-The first thing I thought of after the pending Yelich contact extension was whether this could serve as a framework for an extension in Cleveland for Indians shortstop Francisco Lindor. The dynamic Lindor has made it clear he loves Cleveland and would like to stay. If he is looking to break the bank and get paid to the max, then he will not be in Cleveland. If he’s willing to take a hometown discount, similar to Yelich’s annual average value of $27-to-$28 million, I have to believe there is a shot for an eight-or-nine-year extension. I hope it happens. Lindor is the type of player who should play his entire career with one team.

-Things continue to unravel for the Red Sox as ace pitcher Chris Sale got three opinions on his aching left elbow and has avoided surgery, at least for the time being. He had an MRI that was read by Sox team doctors and then the readings were sent to Dr. James Andrews in Birmingham, Ala. Then the MRI was sent to Dr. Neal ElAttrache, the Los Angeles Dodgers head team physician. It was almost as if the Red Sox kept seeking doctors’ opinions until they got the message they wanted to hear. Rest and rehab are the current recommendations for Sale. He will definitely not be ready for Opening Day. The Sox are already challenged with very little depth in the rotation. They have a number of pitchers battling to the fifth spot on the staff behind Sale, Nate Eovaldi, Eduardo Rodriguez and Martin Perez. They just can’t afford the loss of Sale for any significant time and still compete in the tough AL East.

-Sale’s injury reminds me that every time I hear players complain about the Collective Bargaining Agreement, it drives me crazy. The current system has rewarded and protected players extremely well. Sure, the players don’t like service-time manipulation or that older players aren’t getting paid like they used to, but ultimately the biggest edge still remains on the players’ side of the ledger and that’s guaranteed contracts. Sale is in the first year of his five-year, $145 million deal and he’s one more MRI away from Tommy John surgery. New York Yankees slugger Giancarlo Stanton has eight years and $215 million left on his contract. Don’t you think the Red Sox and Yankees respectively would like to get out from under those deals? If they could renegotiate the deals, they would. If they could release these players right now, they would. But they can’t because of the CBA. The players aren’t victims and this spring we have been reminded of that a million times over.

-In 2019, hitters shattered the single-season home run record. There were 6,776 homers launched, which was 671 more than the previous record season in 2017. Fifteen teams set home run records. The word around the game and later acknowledged by MLB was that the baseballs were different – the seams were lower and the drag coefficient was lower as well. There was less drag on the baseballs and they sailed further, leading to more dingers. This year, pitchers are indicating that the balls feel softer in their hands and the seams seem higher, allowing for more drag and less distance after contact. I expect home run numbers to go down. I also expect MLB commissioner Rob Manfred will deny directing a correction.

-ESPN has continued their practice of putting microphones on players during spring training games. The broadcast booths interact with players during the live action. It’s a great opportunity to get to know players and experience their personalities. Many fans have commented that it’s a practice they would love to see continue during the regular season. As a former general manager, I have no problem with this becoming a permanent spring training practice, but I would not like it during the regular season because the games mean too much. There’s too much invested in a player not having complete focus on the game. I would, however, be okay with a player being mic’d as long as nobody interacts directly with my player. Networks can play edited video and audio of the player talking to teammates, opponents and umpires. I just don’t want my guys to be distracted with being in conversation during the game.