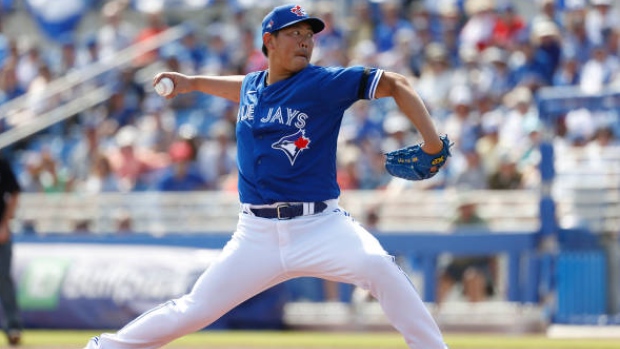 CLEARWATER, Fla. — Right-hander Tanner Roark gave up a run and two hits in two innings in his Toronto debut as the Blue Jays lost 5-3 to the Philadelphia Phillies in pre-season action Thursday.

The 33-year-old Roark, who signed a two-year deal with Toronto in the off-season, battled the flu earlier in spring training, keeping him off the mound.

Roark is expected to be part of a Toronto starting rotation featuring Hyun-Jin Ryu, Matt Shoemaker, Chase Anderson and an undetermined fifth pitcher.

Vladimir Guerrero Jr., provided the offensive highlight for Toronto, hitting his second home run of the spring in the sixth inning.

Roman Quinn's homer off Roark in the first cut Toronto's lead to 2-1.

The Blue Jays jumped in front on RBI singles by Travis Shaw and Randal Grichuk.

Blue Jays right-hander Shun Yamaguchi, one of the pitchers trying to land the fifth spot, had a rough outing in relief. He gave up three homers, four runs and five hits in 2 1/3 innings.

The Blue Jays open the regular season at home March 26 against the Boston Red Sox.