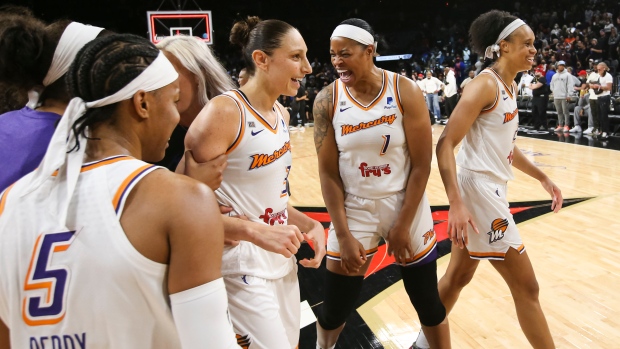 Game 5 of the WNBA western semifinals was a heavyweight fight between two exceptional franchises. The Phoenix Mercury outlasted the Las Vegas Aces 87-84 on Friday, punching their ticket to the championship round -- with a shorthanded roster.

It was a back and forth affair, but the fourth quarter belonged to Diana Taurasi and the Mercury. The "White Mamba" poured in 14 points in the final frame after a quiet three quarters from her. Brittney Griner also came up big with a game-high 28 points and a key block on the Aces A'ja Wilson on the final possession.

The Michelob Arena in Las Vegas was rocking throughout this high-stakes matchup. The 9,680 people in attendance set a record for an Aces game. Fans were eager to see this postseason matchup.

The Aces came in ready to defend home court -- but they had to show off their fashion sense first. Wilson has worn iconic jerseys of basketball players all postseason, and she decided to wear one with a personal connection for Game 5. She rocked a Dawn Staley Virginia jersey pregame, showing love to her former coach. Staley coached Wilson from 2014-2018, and they both led the South Carolina Gamecocks to a national championship in 2017.

Staley made sure to reciprocate the love back to her former player.

After both teams went through warmups, it was time for the Mercury and Aces to battle it out in a win-or-go-home Game 5. WNBA Legend and Basketball Hall of Famer Tamika Catchings expressed her excitement on social media, as she was ready to watch these two teams fight for a trip to the Finals.

The Chicago Sky -- who already clinched a spot in the championship round Wednesday, were waiting patiently to see who they would face -- while doing a little scouting in the process.

The game had the feeling of a playoff contest, as it was physical to start. The Mercury were led by Shey Peddy in the first, who scored seven early points. Her scoring and the physicality by the Phoenix's defense allowed them to get a 20-14 lead after one.

During the second, the Aces responded with some quality shooting from deep -- specifically from Kelsey Plum. She drained two shots from beyond the arc in the quarter while Liz Cambage and Wilson kept things going down low.

After a wild first half, the Mercury had a slim lead going into the locker room -- 44-42.

The physicality and abundance of points had everyone locked for this sensational contest.

The Aces got off to a hot start in the third -- thanks to 2020 League MVP in Wilson. She made a key steal on a Taurasi pass, causing a clear path foul. She followed that up with an offensive rebound and put back the next offensive possession.

The stars were out for this do-or-die game five -- and they enjoyed every minute. Las Vegas Raiders defensive end Clelin Ferrell was in the arena for the entertaining game. His teammate Casey Hayward Jr. was also at the game -- and both had their popcorn handy. Another athlete made an appearance -- former MLB player and two-time World Series champion David Justice got some facetime on the jumbotron during the contest.

The Mercury didn't shoot the three-ball well throughout the game, and the Aces took advantage in the fast break, going on a 14-0 run in the third. Chelsea Gray and Cambage led the way, each scoring six points in the third quarter.

The game was chippy throughout, and it got even more tense heading into the fourth. Jackie Young and Taurasi exchanged some words when the buzzer sounded, needing to be separated by officials.

Maybe it wasn't a good idea to get under Taurasi's skin, and it came back to bite Young and the Aces.

In the final frame, Taurasi started doing her usual "White Mamba" things. She scored some clutch buckets during a Mercury 10-0 run, giving them the lead early in the fourth.

The Aces responded to the Mercury's run with the help of timely buckets from Plum and Gray.

The game had a chaotic finish, as Taurasi drained a go-ahead three with under a minute to go. However, Gray and the Aces weren't done yet, as she cashed in a three-pointer of her own to give her team the lead late. Gray matched Taurasi's three with one of her own to tie the game.

It's safe to say that everyone watching the game didn't want it to end, as both teams were leaving it all on the floor.

Unfortunately for Las Vegas, a foul on a Shay Peddy three-pointer with on the next Mercury possesion left turned out to be a costly mistake. Peddy made two of the three free throws to extend the lead to two, but the Aces still had a chance to tie. They gave the ball to Wilson -- hoping she'd make a play, but Griner blocked her shot at the rim with under a second left. The game was over at that point -- an amazing finish to what was a phenomenal Game 5.

Phoenix Suns guard Chris Paul made sure to congratulate the Mercury on their finals berth -- as both of Arizona's professional basketball teams have made the championship round in their respective 2021 seasons. The WNBA Phoenix team will face the Sky on Sunday for the championship.