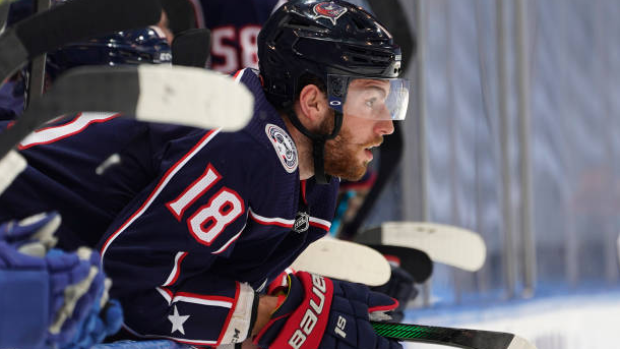 It appears Pierre Luc-Dubois’ time in Columbus could be coming to a close soon.

According to TSN Hockey Insider Darren Dreger, the Blue Jackets are “closing in” on a trade involving the 22-year-old centre and Dreger notes the Winnipeg Jets are the frontrunners as of Friday night, although nothing is done yet.

"I’d be surprised if a deal isn’t done by the end of the weekend, perhaps as early as Saturday. Now, the indications are that the Winnipeg Jets are the frontrunner, but I have to make this clear that the trade, a deal is not done yet which promotes speculation that other teams are trying to stay in the mix. And that makes good sense. Why wouldn’t you if you’re Marc Bergevin of the Montreal Canadiens or Bob Murray of the Anaheim Ducks as an example? Now, if the deal gets done with Winnipeg, you have to believe that Patrik Laine would be included in that. Star for star. There’s some speculation that maybe Jack Roslovic, who maybe doesn’t have a contract and isn’t with the Winnipeg Jets, could also be involved. But I stress. It is not done yet, but it could be resolved as early as Saturday," Dreger told SportsCentre.

“It’s a complicated process that could be resolved as early as tomorrow. Teams have been told they’re out. Hard to say who’s in, but it’s believed Winnipeg is among them,” Dreger tweeted earlier Friday evening.

My sense from canvassing sources tonight, Columbus is closing in on a trade involving Pierre Luc Dubois. It’s a complicated process that could be resolved as early as tomorrow. Teams have been told they’re out. Hard to say who’s in, but it’s believed Winnipeg is among them.

As for where Dubois could land if a trade is completed, TSN Hockey Insider Pierre LeBrun reports that Columbus would be a natural landing sport for Roslovic in a potentially larger deal.

“Assuming Laine is the headliner but would make sense for the Jackets to want Roslovic as well. Let’s see where this goes,” LeBrun tweeted.

Columbus would be a natural landing spot for Jack Roslovic potentially part of a larger deal here. Assuming Laine is the headliner but would make sense for the Jackets to want Roslovic as well. Let’s see where this goes. https://t.co/cuaXdI3nwk

The Montreal Canadiens also remain in the mix on Pierre-Luc Dubois. Winnipeg, Anaheim, Montreal it would appear at this juncture.

LeBrun adds that the Canadiens also remain in the mix for Dubois, making Winnipeg, the Ducks and the Habs as potential suitors at this juncture.

The Athletic's Aaron Portzline reports Dubois will be a healthy scratch if still on the roster Saturday afternoon as Columbus takes on the Tampa Bay Lightning.

Told #CBJ Pierre-Luc Dubois will be a healthy scratch vs. #TBLightning on Saturday … if he’s still on the Blue Jackets’ roster.

Sense is GM Jarmo Kekalainen was taking a patient approach to trading Dubois, but Thursday made a trade more urgent.

In Thursday’s overtime loss to the Lightning, Dubois had only 3:55 of ice time, failing to see the ice again after appearing to give up on a puck battle in the offensive zone in the first period. This comes after Dubois logged a previous season-low 15:22 of ice time in Monday's victory over the Detroit Red Wings.

Did that shift have an impact on how much time Dubois may have left in Columbus?

"It expedited the process. And no doubt about that, and the player is probably thankful for that because keep in mind, before he signed his extension, in Columbus, Pierre-Luc Dubois did formally request a trade from the Blue Jackets. Now, Columbus is going through their sluggish start so maybe there was just something that needed to happen to get this process moving, and that something was the shift. But anyone who has watched Pierre-Luc Dubois play and the 20-plus general managers who expressed interest in this player, they know that that shift or his game over the last five games as John Tortorella has acknowledged is not an indication of the star quality of Pierre-Luc Dubois. He is legitimately a No. 1 or a 1A on teams who have a very good No. 1 centre, so that did not push off the interest in any way shape or form," Dreger told SportsCentre.

Tortorella revealed on Jan. 13 that the Ste-Agathe-des-Monts, Que., native requested a trade from the team, two weeks after Dubois signed a two-year, $10 million deal with the club as a restricted free agent.

This is his fourth season with the Jackets after being selected No. 3 overall in the 2016 NHL Draft.