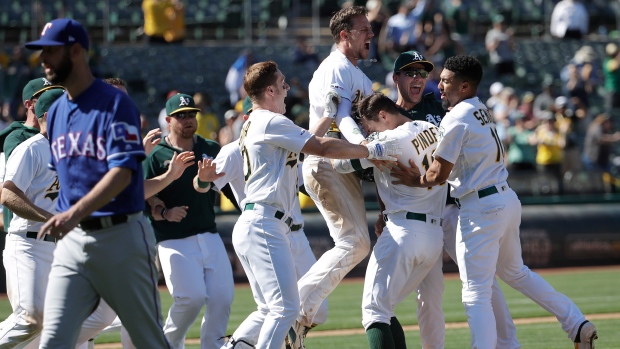 OAKLAND, Calif. — With an impressive diving catch and the first game-ending hit of his career, Chad Pinder is making a strong case for more playing time.

It's a point that Oakland manager Bob Melvin is finding increasingly difficult to argue.

Pinder's two-out RBI single in the ninth inning lifted the Athletics to a 6-5 victory over the Texas Rangers on Wednesday.

"He contributes. He gets big hits, he does timely things," Melvin said. "You feel good about him at the plate in that at-bat. He's not going to try to do too much. Smart player on top of everything."

Stephen Piscotty singled with one out off Chris Martin (1-1) and then stole second base. After Khris Davis flew out, Pinder looped a soft hit into right field. Piscotty slid into home plate to beat a wide throw home from Nomar Mazara as the A's dugout emptied, mobbing Pinder near first base.

Pinder had struck out swinging in his previous two at-bats.

Until then Pinder's best moment came when he made a diving catch to rob Shin-Soo Choo of a hit leading off the fifth and preserve a 3-3 tie.

"If that ball drops, who knows?," A's starter Aaron Brooks said. "If he leaves his feet it could have been a double. Then that's totally a different game. That was huge."

The game was delayed for several moments in the ninth after Delino DeShields grounded into an inning-ending double play. Rangers manager Chris Woodward came out and engaged all four umpires in a lengthy discussion as his players remained in the dugout.

Replays appeared to show that A's second baseman Profar came off the bag before receiving the throw from Semien, but Woodward did not ask for a challenge in time.

"I guess if you don't put it up right away they have the authority to not let you challenge, and that's kind of what happened," Woodward said. "My argument was that it's too important in the ninth inning of a tie game and the potential of (Hunter Pence) being safe at second base is too important. They wouldn't do it."

Matt Chapman and Marcus Semien homered to help the A's complete a three-game sweep. Nick Hundley had two hits and Jurickson Profar added an RBI single to snap an 0-for-17 funk.

Mazara homered twice for Texas and Logan Forsythe also went deep as the Rangers fell to 2-7 on the road.

Blake Treinen (1-1) retired three batters and got a big double play in the ninth to earn the win.

Brooks allowed three runs in five innings and pitched around a pair of home runs in an outing that left Melvin mostly pleased. "Got off to a little bit of a slow start . but at the end of the day he comes out after five and he ends up leaving with the lead," Melvin said. "Maybe not his best outing but kept us in the game."

Piscotty scored the winning run on a day he achieved two other milestones. His single in the fifth inning extended his hitting streak against Texas to 17, while the game marked the 500th of Piscotty's career.

Rangers: 2B Rougned Odor has started a rehab assignment with Triple-A Nashville. Odor has been on the injured list since April 11 with a right knee sprain. ... 1B Ronald Guzman (right hamstring strain) flew to Arizona for extended spring training.

Athletics: Matt Olson is getting closer to returning after undergoing right hand surgery in late March. The first baseman has been hitting soft toss in the batting cage and could begin a rehab assignment next week. ... Top pitching prospect Jesus Luzardo played catch for the first time since being shut down with a muscle strain in his left shoulder.

Rangers: LHP Taylor Hearn was called up from Triple-A Nashville and will make his first major league start Thursday against Seattle. To make room, RHP Wei-chieh Huang was optioned to Nashville.

Athletics: RHP Mike Fiers (2-2, 8.28) faces the Blue Jays in Toronto on Friday. Fiers' ERA is the second-highest in the majors among pitchers with 20 or more innings.