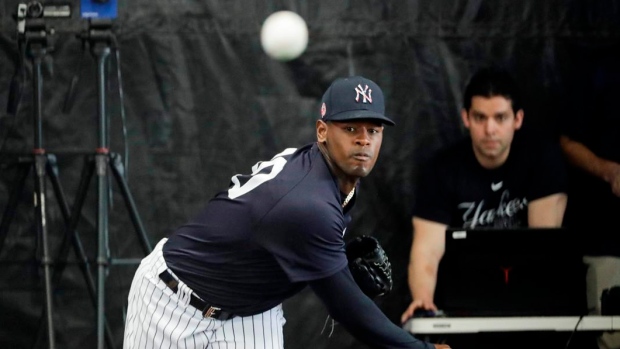 NEW YORK (AP) — Pitcher Luis Severino was activated by the New York Yankees before Monday's series opener against Texas and is in position to make his first major league appearance in nearly two years.

Yankees manager Aaron Boone says he plans to use the two-time All-Star out of the bullpen. New York began the day 1 1/2 games behind Toronto for the second AL wild-card spot.

The 27-year-old Severino has completed his rehabilitation from Tommy John surgery on Feb. 27, 2020. The right-hander made four minor league appearances totalling 10 2/3 innings for Tampa, Hudson Valley and Somerset, allowing four runs, five hits and one home run with three walks and 15 strikeouts.

A 19-game winner in 2018, he was limited by shoulder soreness to three appearances in 2019, the first on Sept. 17 and the last on Sept. 28, plus a pair of postseason starts that Oct. 7 against Minnesota in the AL Division Series and Oct. 15 against Houston in the AL Championship Series.

Right-hander Sal Romano was released by the Yankees to open a roster spot.