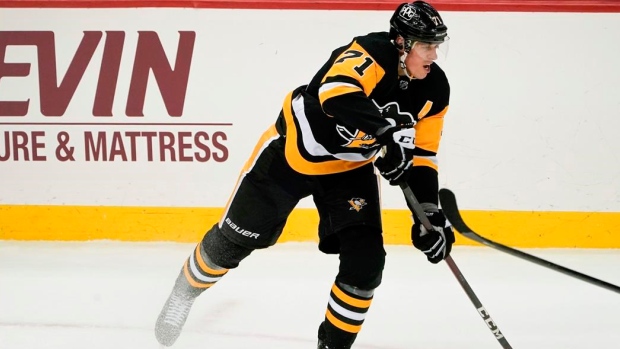 Evgeni Malkin skated on his own before Pittsburgh Penguins practice again Wednesday, but does not yet have a firm date to make his season debut.

Malkin is continuing to recover from off-season surgery and was previously ruled out for at least the first two months of the season.

"We have a ballpark idea of when we think he'll be available," Penguins head coach Mike Sullivan said. "I'm always reluctant to put a date out there, because if we don't meet that date, everyone speculates.

"We'll see how he progresses as he gets closer, but what I will tell you is that we're very encouraged with the progress that he's made."

Coach Sullivan said at this point, there is no set target date for Evgeni Malkin to start skating with the team. "We have a ballpark idea of when we think he'll be available. I'm always reluctant to put a date out there, because if we don't meet that date, everyone speculates."

The 35-year-old was initially hurt during a collision against the Boston Bruins on March 16. He missed the final six weeks of the regular season and didn't return to action until Game 3 of Pittsburgh's first round loss to the New York Islanders.

In 15 seasons with Pittsburgh, the three-time Stanley Cup champion has 424 goals and 680 assists for 1,104 points.