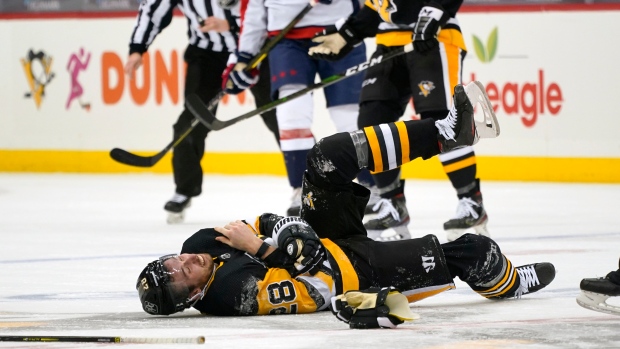 With injuries mounting on the blueline for the Pittsburgh Penguins, it appears general manager Jim Rutherford is ready to turn to the trade market for help.

The Penguins are currently without Mike Matheson, Marcus Pettersson and Juuso Riikola due to injuries as they approach their fifth game of the season on Friday.

TSN Hockey Insider Darren Dreger reported Thursday Rutherford is scouring the trade market, but knows he likely have to settle for a third-pairing blueliner.

"He's looking for a defenceman and part of that is through urgency and necessity and the fact he's already experienced injuries to the Pittsburgh Penguins blueline," Dreger said on Insider Trading. "But you're right, Jimmy Rutherford historically, traditionally, has always tried to get his shopping out of the way early. He's in the market for the best available defenceman but, in reality, he knows that he's going to have to settle for a third-pairing defenceman. He's definitely in the market looking for some help."

Matheson was placed on injured reserve last week an upper-body injury, while Pettersson and Riikola were both injured in Tuesday's overtime win over the Washington Capitals. Penguins head coach Mike Sullivan said Thursday Pettersson is week-to-week, while Riikola will be out "longer term."

The Penguins recalled defenceman Pierre-Olivier Joseph from their taxi squad on an emergency basis on Friday ahead of their game against the New York Rangers. Joseph has never appeared in an NHL game.

The Penguins have recalled defenseman Pierre-Olivier Joseph from the taxi squad on an emergency basis.

Joseph, 21, will be looking to make his NHL debut tonight against the New York Rangers.

The Penguins, 2-2 to start the season, have just over $1.9 million in cap space, per CapFriendly.