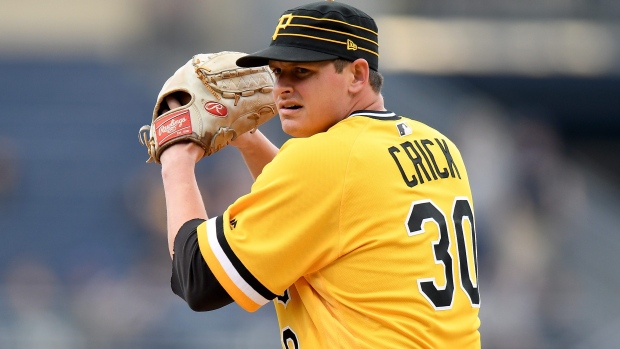 It's been an ugly season for the Pittsburgh Pirates, but things got a lot worse Tuesday night.

The team announced reliever Kyle Crick is out for the season after injuring his finger in an altercation with teammate Felipe Vazquez before Monday's game against the Giants in San Francisco. The Pirates announced that Crick will have surgery to repair an extensor tendon on his right index finger.

“The behavior exhibited by these two players last night is unacceptable, inconsistent with the standards expected of a Major League player and will not be tolerated by the organization,” executive vice-president and general manager Neal Huntington said in a news release.

But Crick offered his side of the story late Tuesday night, saying it was Vazquez who threw the first punch.

“It was one of those clubhouse altercations. A lot bickering back and forth,” Crick said via Nubyjas Wilborn of the Pittsburgh Post-Gazette. “Punches were thrown and at some point you have to stand up for yourself and start throwing them back. It’s one of those deals where it’s unfortunate. There are two losers in this deal. Nobody can win a fight with a teammate.”

When asked to confirm if he was saying Vazquez delivered the first blow, Crick replied with a "yes."

Vazquez declined comment, instead telling reporters "you already got all you need" while nodding in Crick's direction.

This wasn't the first internal dust-up the Pirates have had this season. Reliever Keone Kela was suspended two games by the team for a "violation of his uniform player's contract" after an altercation with a coach, while bullpen coach Euclides Rojas was also handed a two-game ban for a previous altercation with Crick. Both of those incidents occurred in late July.

“I have concerns about three individual incidents that have gone on this year. I’ve been here nine years and we’ve had none,” Pirates manager Clint Hurdle said. “Now we’ve had three this year. Two that resulted in suspensions and one that had fines involved. We’ve spoken to the club today. We had a conversation. We revisited internally as a family about how we meet challenges and rise above them.”

The Pirates enter play Wednesday sitting at 63-82, good for last place in the National League Central. They are on pace for their worst season since 2010.