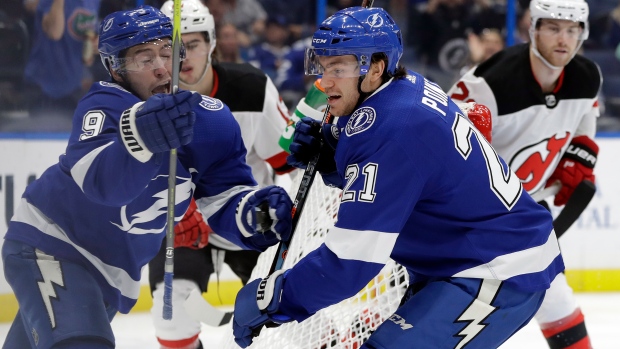 TAMPA, Fla. — Brayden Point and the Tampa Bay Lightning had a big-time response after a lopsided loss at Arizona over the weekend.

Point had a career-high five points with a goal and four assists, defenceman Braydon Coburn scored twice, and the Lightning rallied from an early two-goal deficit to beat the New Jersey Devils 8-3 on Tuesday night.

"We controlled the majority of the play," Lightning star Steven Stamkos said.

Point has seven goals and seven assists in 11 games this season.

Stamkos got his 350th career goal and added two assists for Tampa Bay, which was coming off a 3-1-1 trip that included a 7-1 loss in Arizona on Saturday.

"It's always nice when you get an accomplishment like that," Stamkos said.

Nikita Kucherov had two goals and an assist, and Tyler Johnson and Ryan McDonagh had the other Lightning goals. Andrei Vasilevskiy made 27 saves.

Kucherov left with 6 minutes left in the second after taking a shot near the inside of his left knee but returned early in the third.

Miles Wood, Travis Zajac and Kyle Palmieri scored for the Devils, who started a seven-game trip. Keith Kinkaid stopped 31 of 38 shots before being replaced five minutes into the third by Cory Schneider, who allowed a goal on six shots in his first game after off-season hip surgery.

"In general, we weren't good enough to be able to win the game," Hynes said. "They were better, basically, in every facet of the game. We've got to learn lessons from it and address some things. We've got some things to talk about tomorrow."

Point scored 31 seconds into the second as Tampa Bay went up 3-2. Kucherov and Stamkos added power-play goals later in the period that made it 5-2.

"The game just slipped away," New Jersey centre Nico Hischier said. "We didn't play our game. We stopped forechecking, we stopped hitting them."

Coburn stopped a 38-game goal drought and has 46 goals in 861 NHL games. He scored just once in three of the previous four regular seasons. It was his second career multi-goal game, with the other coming on Oct. 31, 2009, while with Philadelphia.

"Every nine years," Coburn said with a smile. "It was real nice to be able to chip in offensively."

"It would have been a cool feeling," Coburn said of a potential hat trick.

Tampa Bay's penalty kill had not allowed a goal in 24 chances at home before Palmieri got his ninth goal, which cut the deficit to 5-3 on the Devils' second power play late in the second. Taylor Hall assisted and extended his point streak to eight games (10 assists, 12 points).

Johnson, Kucherov and McDonagh all scored in the third.