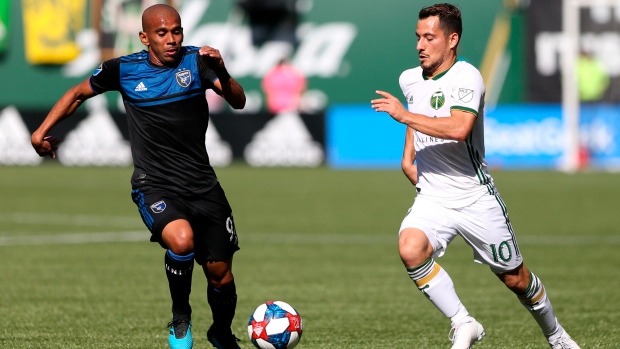 PORTLAND, Ore. — The Portland Timbers defied their recent results for a dominant win over San Jose that secured them a spot in the playoffs.

"The players showed that in big moments they show up," Timbers coach Giovanni Savarese said. "They came today with an unbelievable energy, they stuck to the plan, and they played a fantastic game. A well-deserved win against a very good team, a very difficult team, and overall I think it was an incredible day."

The Timbers broke open a 1-1 stalemate at halftime to beat the Earthquakes 3-1 on Sunday. The Timbers (14-13-7) finished sixth in the Western Conference and will face Real Salt Lake in the opening round.

The Earthquakes (13-16-5) were eliminated with the loss, but Chris Wondolowski's first-half goal extended his MLS career scoring record. San Jose ended the season with a six-game losing streak.

The match was among the most closely watched on Decision Day, the final day of the regular season when all the matches are played simultaneously. In addition to the Earthquakes and Timbers, FC Dallas and the Colorado Rapids, were also vying for the final two playoff berths in the Western Conference. Dallas took the other spot with a 6-0 victory over Sporting Kansas City.

The Timbers, who got goals from Larrys Mabiala, Dairon Asprilla and Sebastian Blanco, were winless in their previous five matches, setting up Sunday's deciding game.

"There was a big change in this group. We pretty much played with 85 per cent of the same players that played last season, who were in last place with a bunch of goals conceded and not too many scored. When we joined San Jose we know it was going to be difficult, and we tried to make the team competitive through a system of play," the Argentine coach said through a translator. "The team started out badly, then 60-70 per cent of the season the team played excellently, and then the end of the season was also negative."

Brian Fernandez, who has 11 goals for the Timbers this season, was suspended for the match because he was shown a red card in last weekend's 2-2 draw with Sporting Kansas City.

Portland also was without Diego Valeri because of a calf injury, as rumours continued to swirl about whether the Timbers' captain would be back with the team next season. Valeri is seeking a contract extension with the team.

San Jose defender Tommy Thompson was sent off during last week's loss to the Seattle Sounders and wasn't available to play.

Mabiala scored in the 29th minute, taking a cross from Jorge Villafana. He celebrated his second goal of the season by running to the sideline and tackling teammate Claude Dielna in front of the bench.

"I just wanted to celebrate with them because the amount of work they put in the training sessions unfortunately not everyone has a chance to see the field on the week," Mabiala said. "It was my way to make them feel the way I was feeling."

Wondolowski equalized for the Earthquakes 10 minutes later on a diving header from close range that popped up and hit the crossbar before falling into the goal.

Wondolowski leads San Jose with 15 goals. He is the career scoring leader in MLS with 159 goals, surpassing Landon Donovan, who had 145. He also leads the league's all-time list with 44 game-winning goals, and 73 road goals.

The 2012 league MVP and two-time Golden Boot winner is in his 15th season in MLS. After the game he said he was undecided about his future.

"I can't thank Matias and the staff enough for reigniting the love and passion for this game for me," he said. "Last year took a lot out of me, both mentally and physically, and I was pretty sure this was going to be the last one coming into this season. That said, I had a lot of fun. I was thinking, this was going to be the time where 'This is a job, I'm done now.' But I do love it."

The Timbers had several good opportunities early in the second half, including a free kick from just atop the penalty area, but couldn't find the net until Asprilla's goal in the 59th minute. Asprilla's first attempt was stopped by San Jose goalkeeper Daniel Vega, but he buried the rebound.

Blanco scored on a free kick that he put over the wall in the 75th minute.