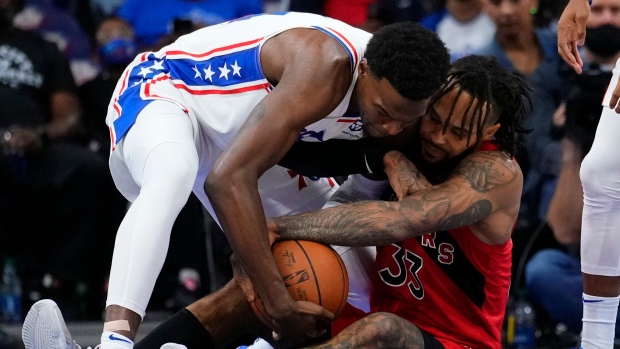 TORONTO – There are some obvious similarities between Gary Trent Jr. and the man he was traded for nearly seven months ago, Norman Powell.

They score in different ways – Powell has always had a knack for getting to the rim, while Trent does most of his work on the perimeter at this stage of his career – but they both get their shots up and can put points on the board in a hurry.

Neither player is shy offensively. In case you needed a reminder, without three regular starters in the lineup for the Raptors’ preseason finale, a 113-108 win over Washington on Tuesday, Trent hoisted up 14 shots in just 24 minutes.

They can both be polarizing. Like a younger Powell, Trent’s shot selection sometimes makes you scratch your head, and he often leaves you wanting more defensively, where his effort and attention to detail don’t always match his length and athleticism.

And, like Powell before him, that leads to the inevitable questions about his role. Trent has the talent, and now the contract, to be a starter, but is he a good fit with the first unit or is his game better suited for specialist-type gig coming off the bench?

It’s a question Nick Nurse and the Raptors are weighing leading up to next Wednesday’s regular-season opener, also against Washington.

With Kyle Lowry in Miami, there’s a vacancy next to Fred VanVleet in Toronto’s starting backcourt. After signing a new three-year, $54 million deal over the summer, Trent looked like the odds-on favourite to land the job. However, the 22-year-old has spent training camp locked in a position battle with Goran Dragic, and if preseason usage is any indication, the veteran point guard appears to have the upper hand heading into the campaign.

After missing the team’s first exhibition game with some quad soreness, Trent came off the bench twice before starting in place of the resting Dragic in Monday’s win over Houston and then starting alongside him with VanVleet resting against the Wizards. Dragic was a starter in all four of the contests he played.

There’s some merit to sticking with Dragic, especially early in the year. Without Pascal Siakam, who is expected to miss the first few weeks after undergoing off-season shoulder surgery, the bulk of the playmaking responsibility will fall on VanVleet. Rookie Scottie Barnes will presumably start in Siakam’s place and has looked comfortable with the ball in his hands during the preseason, but do they trust him as a secondary playmaker with the first unit right out of the gate?

Starting Dragic allows VanVleet to play off the ball and also takes pressure off him as the primary creator.

The counterargument: with Siakam out, that group could also use Trent’s scoring. Nurse has a couple very different options to choose from.

“I think they’re very, very different players,” the Raptors head coach said over the weekend. “Goran’s kind of a point guard by nature. He’s more of a ball handler, leader, facilitator type guy and Gary’s a guy we’re sending off screens and spacing up and flying around and stuff.”

“I’m playing Goran with Freddy right now [but] I think Gary’s one of eight guys that could be a starter at times, as well. He could [also] be offence off the bench.”

Historically, Nurse’s preference has always been to keep his lineups fluid. VanVleet, OG Anunoby and Siakam, when healthy, are locked into their starting spots. From there, Nurse has indicated that he could mix and match a bit early in the season. He’s already hinted at a platoon at centre, with Precious Achiuwa and Khem Birch splitting the position. On any given night, Dragic versus Trent could come down to matchups, or maybe even the hot-hand approach.

Trent struggled with his jumper in the preseason, shooting 4-for-22 from three-point range, including 1-of-7 on Tuesday. Still, they’re not worried about his shot; they know it’ll come. The focus for Trent has been on showing growth in the other areas of his game – being decisive on the catch, making the right play with the ball, getting the rim and, most importantly, defending with consistency.

In that respect, he finished the preseason strong. Early in Tuesday’s win, Trent spun around a Wizards defender and drove into the lane for a layup. He picked off Bradley Beal’s pass in the first minute of the game, and then forced another turnover a couple possessions later. He recorded six steals over the final two games and had 10 deflections in Monday’s win over Houston, a stat that Nurse made sure to point out the following day.

“He's playing really hard,” the head coach said of Trent, who finished with 12 points and six rebounds in 24 minutes on Tuesday. “He's really trying to do things right, he's still trying to learn some things. We know he can score… But his mindset's great, and I think his competitive nature is really high right now. I really like it. He's really coachable and really fun to be around.”

Dragic also made a lasting impression in Toronto’s preseason finale. After easing his way into camp, the 35-year-old vet turned in his best performance against Washington, hitting four of his five three-point attempts and scoring 16 points in 22 minutes of action.

“It was kind of what I was hoping to see out of Goran tonight, looking to run the show and [take advantage of] his opportunities,” Nurse said afterwards. “He looked much more comfortable out there tonight, which is good. We put in a couple of his old sets that he’s used to running back in the day and tried to get him back in the groove.”

“This is preseason so I don’t put much into it,” said Dragic. “But when the regular season starts that’s a different ballgame. I’ve been in the league for 14 years so I know what to expect.”

Dragic showed some of that veteran leadership in the locker room after the win, calming some of the young guys down and reminding them what time of the year it is, according to Nurse.

Even though these games don’t count, there’s still cause for encouragement coming out of the Raptors’ 3-2 preseason.

You couldn’t ask for much more from Anunoby, who got the night off for rest on Tuesday but totalled 77 points in 101 minutes through four games, while shooting 26-for-50 from the field, 13-for-24 from three-point range and 12-for-13 from the free-throw line. He looked comfortable and confident in his expanded offensive role and appears to be on the precipice of a breakout season.

Barnes got his first taste of NBA basketball and didn’t look out of place. He showcased his immense two-way potential, serving as the primary defender on Boston’s Jayson Tatum over the weekend and then holding Beal to 1-of-11 shooting in Washington, while totalling a team-leading 28 assists and committing just nine turnovers over the five games. He’s the real deal.

After last year’s failed frontcourt experiment, Toronto seems to be in capable hands at the centre position with Achiuwa and Birch, who re-joined the club this week after testing positive for COVID-19 last month. Malachi Flynn bounced back from his slow start to camp, scoring a team-high 22 points against the Wizards. There were pleasant surprises, like Svi Mykhailiuk, two-way wing Justin Champagnie, and hometown kid Dalano Banton. Even the guys fighting for the final roster spots went out with a bang, as Sam Dekker (18 points), Ish Wainright (seven points and four rebounds) and Freddie Gillespie (three points and seven rebounds) helped closed out the win over Washington.

They’ll make their final cuts over the coming days and have a week of practice time before the ball goes up for real next Wednesday. Nurse will also have to decide on five starters, even if a few of those spots are only pencilled in to start the year.

Dragic seems like a safe bet to be among them, at least for now. However, given their investment in him and his importance to their future, it would be a surprise if Trent wasn’t starting by mid-season, especially with Toronto expected to field offers for Dragic and his expiring contract ahead of the trade deadline.