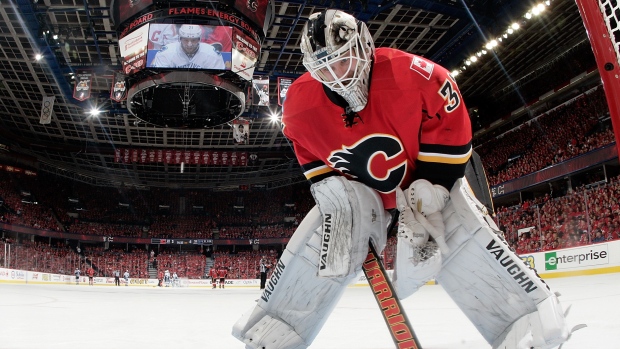 RAMO - 5 - Outstanding relief performance, great stick work near the end of game with big poke check on Henrik Sedin and then a blocked pass out front that leads to the empty-net goal. Quality work coming in cold.

MILLER  - 2 - Big saves early as Calgary pushed hard. Aggressive all game at top of his crease, but had rebound issues and the game-winning goal was a scramble that could have been avoided with better rebound control.

HALAK - 5 - Was outstanding today, made big saves in the first period to keep it close on Ovi, Backstrom and Johansson. Fought off a late push by the Caps and got a bounce late that beat him but hit the crossbar and stayed out.

HOLTBY - 4 - Very strong game as well. Stopped a few two-on-one plays to keep it at 1-1 and handled the puck well as well (one of the best in league). Game-winning goal was a good move by Nikolay Kulemin as he was left all alone in front.

MRAZEK - 5 -  Great all night long, especially on the PK. Reacted to seam plays well and was good on scramble plays, was very aggressive on shots, and didnt allow Tampa many second opportunities.

BISHOP - 2 - Second goal against was a bad rebound off of a bad angle shot, made it a big hill to climb up. Goal against No. 3 was a screen but didn't fight to find puck. No scoring support for sure, but still allowing at least one bad goal a game

DARLING - 1 - Tough start, allows three on 12 shots and got caught with his lateral movement a few times that cost him.

CRAWFORD  - 5 - Great in relief, made a few big stops when needed. Wasn't tested too much as he only faced 13 shots in almost 50 minutes of work.

RINNE  - 4 - Gave them a chance to stay in game as Chicago continued to press hard the final two periods. Game-winning goal is a seeing eye shot that finds its way through bodies.