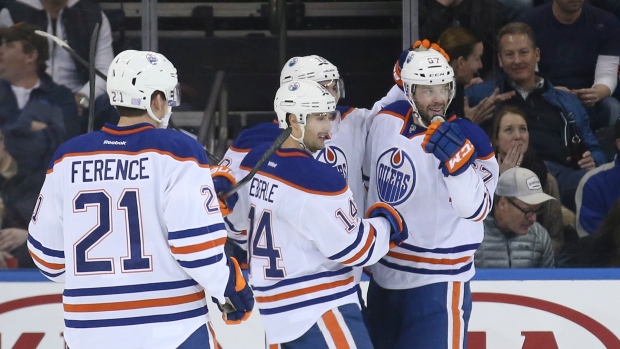 NEW YORK, N.Y. - Benoit Pouliot made the most of his return to Madison Square Garden.

Pouliot scored the go-ahead goal against his former team midway through the second period and backup Viktor Fasth made 20 saves as the Edmonton Oilers beat the New York Rangers 3-1 on Sunday night.

Pouliot scored his second goal of the season off a nifty pass from linemate Ryan Nugent-Hopkins at 8:29 of the middle period to put the Oilers ahead, 2-1. Pouliot was a key member of the Rangers as they reached the Stanley Cup finals last spring before he signed a five-year, $20-million deal with Edmonton in July.

"It was fun to be back and great that we came out with a win," Pouliot said. "Last year was awesome for me. Of course playing against guys I had a great time with, I wanted to do well."

Nugent-Hopkins opened the scoring at 3:19 of the first with his team-leading fifth this season with assists to Pouliot and Jordan Eberle. Carl Hagelin tied it for the Rangers with 7:26 remaining in the period with his fourth goal.

Teddy Purcell's empty-net goal at with 1:27 remaining in the game sealed the Oilers' second straight win. Edmonton snapped a four-game losing streak with a win at Buffalo on Friday.

"Those are the types of games that we want to get the result in because it goes a long way to the learning process for our guys," Oilers coach Dallas Eakins said. "We had success throughout the game playing an aggressive game."

The Rangers lost for the second time in two nights, coming off a 5-4 loss at Toronto on Saturday night.

With an unusual 6 p.m. local start time, the Oilers played better from the start, outshooting the Rangers 11-8 in the first period. The trend continued in the second as the Rangers put forth a minimal attack, with six shots on Fasth while Edmonton had 13 more on Lundqvist.

The Rangers continued their uninspired play in the third, bringing a few jeers from the Madison Square Garden crowd. It took 11 minutes into the final period for New York to register its first shot on goal by Tanner Glass.

"Our effort was unacceptable," Rangers defenceman Marc Staal said. "We were out of sorts all over the ice and we were losing battles. It's tough to win a hockey game that way."

The 32-year-old Fasth started opposite fellow Swede Henrik Lundqvist for the first time. It was Fasth's third start in four games in place of Ben Scrivens.

"The boys were great blocking shots and making good plays in front of me, especially when they had a push at the end," Fasth said. "It feels really good as a team."

Lundqvist, who finished with 30 saves, kept the Rangers in the contest, especially in the middle period with saves on Justin Schultz and rookie Leon Draisaitl. The loss left the Rangers' goalie searching for answers.

"When the energy isn't there, it's hard to play this game," he said. "We need to raise our level. There's no way around that."

The Oilers were without leading scorer Taylor Hall who missed his fourth straight game with a sprained knee. However, they welcomed captain Andrew Ference back after the defenceman missed three games because of a suspension for an illegal check to head of Vancouver's Zack Kassian.

The Rangers continued to play without injured defencemen Ryan McDonagh (shoulder) and Dan Boyle (hand). They also missed John Moore, who completed a five-game suspension for a high hit on Minnesota's Erik Haula.

Moore can return for Tuesday's home game against Pittsburgh. Boyle has been out since the season-opener but has resumed practicing with the team and could return this week.

"We are going to evaluate our team, see where we are, see if we can make some adjustments and go from there," Vigneault said.

NOTES: The Rangers play eight of their next 13 games at MSG . The teams meet again Dec. 14 in Edmonton. The Oilers complete their five-game road trip at Nashville on Tuesday.