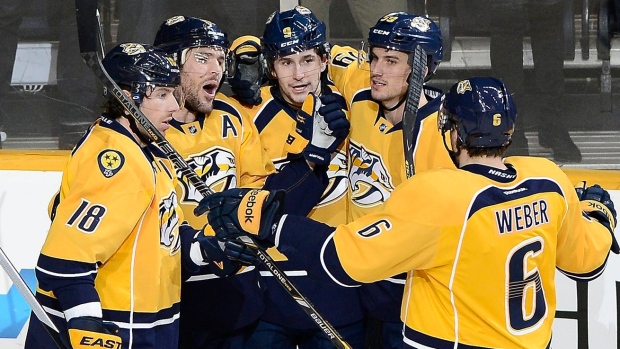 NASHVILLE, Tenn. - The Nashville Predators know almost every Western Conference team they face from here through season's end could be a playoff opponent come April.

So the Predators went out Thursday night and beat the Jets 3-1 for their fourth straight win, becoming the NHL's first team to 80 points and maintaining their three-point lead atop the standings.

"You never know who you're going to face in the first round, it's so tight in the standings," Predators goalie Pekka Rinne said. "You try to show up every single night and just be ready for it, and I guess in the back of your head kind of make them think they don't want to play us in the playoffs."

Filip Forsberg set the franchise rookie record with his 19th goal this season, topping the mark by Alexander Radulov in 2006-07. His power-play goal put Nashville up 2-1 in the second period, and he also had an assist. Shea Weber had a goal and two assists, James Neal had a goal, and Roman Josi added two assists.

"I'm thinking I see it all, but he just surprises me every night how good he is," Forsberg said of Rinne. "So it's an honour to have him on our team."

Michael Frolik scored for the Jets. Winnipeg snapped a two-game winning streak in its first game with defenceman Tyler Myers and forward Drew Stafford following Wednesday's trade that sent Evander Kane to Buffalo. Stafford said he felt a little rusty. But he likes the swagger he has found with the Jets and said he is grateful to be a part of this team.

But the Jets couldn't crack Rinne.

"Their goalie played out of his mind and we hit a bunch of posts, and so we were close but unfortunately it slipped away," Stafford said.

The Jets had a chance to tie it with 91 seconds of a 5-on-3 advantage nearly midway through the third.

The Predators took their timeout, then they helped block shots with Rinne stopping first Blake Wheeler, then covering up a tip-in attempt by Andrew Ladd from in front with 26 seconds left on the Jets' power play. Fans gave Nashville a standing ovation after killing the penalties.

Neal sealed the win with his wrister at 16:10 just after the Predators finished a power play.

"I liked a lot of the things we did except for the result," Jets coach Paul Maurice said.

The Predators jumped on Winnipeg early.

Ben Chiarot went to the box for delay of game at 2:48, and Weber scored his 13th this season on a slap shot with 1 second left on the man advantage.

Ondrej Pavelec's great glove save on a shot from in front by Predators forward Colin Wilson at 9:09 kept it 1-0, allowing Frolik to tie it up with his power-play goal as he tipped in a shot by Dustin Byfuglien at 11:42.

Forsberg put the Predators ahead to stay at 3:38 of the second on a nice wrister, just 16 seconds after Anthony Peluso was whistled for hooking.

Rinne had several strong saves before topping himself as the Jets wrapped up a power play at the start of the third. Rinne made a pad save, then dove back to his right to block a shot from Bryan Little from the right circle prompting fans into a quick "Pek-ka" chant.