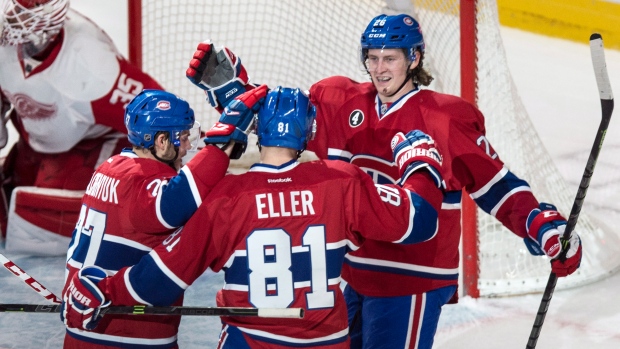 MONTREAL - A brilliant season that has made goalie Carey Price a candidate for the Hart Trophy has also put him into the Montreal Canadiens record book.

Lars Eller scored 1:21 into overtime as the Canadiens defeated the Detroit Red Wings 4-3 on Thursday night to give Price a team record with his 43rd victory of the season.

"I definitely have lot of respect for what they accomplished in their careers," said Price, the NHL leader in every key goaltending statistic this season, including wins. "They went on to win Stanley Cups and that's my ultimate goal.

"(The record) crossed my mind, but at the same time, I focused on what I needed to do. That's what got me where I am."

Tomas Tatar, Pavel Datsyuk and Darren Helm scored in regulation time for the Red Wings (42-25-14), who reached the post-season for a 24th consecutive season despite the defeat. Detroit qualified by earning a point while Boston lost to Florida in regulation time.

"It's a weird scenario," said Detroit defenceman Niklas Kronwall. "We battled hard, but there wasn't a lot of room out there.

"We found way to get a point and that was big for us. That got us in (the playoffs) this season."

When Eller's shot from the left side trickled through Red Wings goalie Jimmy Howard's equipment and into the net, the Canadiens mobbed Price.

Fans stood and cheered, some chanting "MVP," as he was interviewed on the ice after the game. Then rearguard Alexei Emelin sneaked up and gave him a cream pie in the face.

"It was shaving cream, it didn't taste too good," said Price, who made 24 saves while a shaky Howard stopped 22.

Now coach Michel Therrien must decide whether Price or backup Dustin Tokarski will play when Montreal ends its regular season Saturday night in Toronto. The Canadiens need a point to clinch first place in the Atlantic Division ahead of Tampa Bay.

"I'm very proud of Carey," said Therrien. "To set a Canadiens record is phenomenal. We're talking about a team that has been around for more than 100 years."

The Red Wings started strong and got the opening goal when Datysuk stripped the puck from Brendan Gallagher and fed Tatar streaking to the net for a high shot past Price at 10:19.

Markov got it back when David Desharnais won a faceoff and the Russian defenceman scored on a one-timer from the point at 17:36.

The teams traded goals again in the second, as Petry joined the rush and shot Torrey Mitchell's pass between Howard's pads at 6:24. Then, Datsyuk skated into the slot and scored on a low shot at 8:07.

Helm picked off a Markov cross-ice pass and scored on a shorthanded breakaway 3:34 into the third.

Brendan Smith played a puck with his hand while seated on the bench and that gave Montreal a two-man advantage and Plekanec got his 25th goal from a bad angle to tie it at 11:39.

Notes — A moment of silence was held for 1940s scoring star Elmer Lach and 1950s defenceman Dollard St. Laurent, who both died this week. . . Montreal was without scoring leader Max Pacioretty, who will miss at least the final two games of the regular season with an upper-body injury. Detroit was without Erik Cole, Justin Abdelkader and Tomas Jurco.