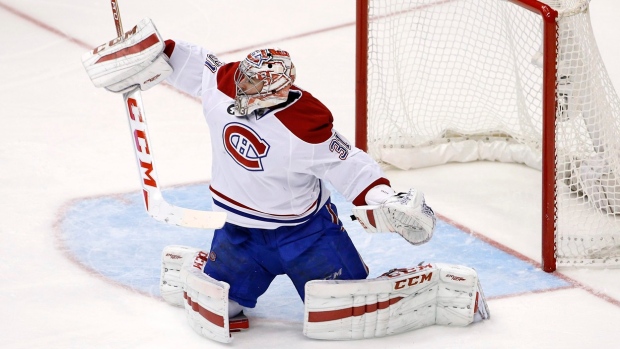 TAMPA, Fla. - P.K. Subban and the Montreal Canadiens can see the light despite the 2-0 series hole they've dug themselves into against the Tampa Bay Lightning.

"Whenever you come to Florida and you get a little bit of sunshine, everyone seems to smile a little bit more," Subban said Tuesday. "We're optimistic at this point.

"We're not pessimistic, I'll tell you that right now. We're one win away from being back in the series."

The Canadiens' confidence comes from their five-on-five play in the series, knowing if they can stay out of the penalty box they're bound to have more success than they did in Game 2. But their biggest reason to believe they can get back in this second-round series is goaltender Carey Price, who so many times this season has carried the Habs on his shoulders.

The good news for Montreal is Price sounded almost as upbeat as Subban ahead of Game 3 on Wednesday night.

Struggles against the Lightning aside — a 3.47 goals-against average and .906 save percentage in the regular season and eight goals on 59 shots so far in the playoffs — Price has shown often this season the ability to single-handedly will Montreal to victories.

The Vezina and Hart Trophy finalist shook off a 6-2 loss Sunday and insisted his focus in on Game 3 alone.

"It's all in your mindset," Price said. "For me it's pretty simple.

"Regardless of good performances or bad performances, for me it's a pretty simple equation. It's been working all season, so I don't see a reason to change it now."

Price is 12-4-4 with two days between games this season. That's the situation he's facing again with the pressure at its highest point.

"It just lets you physically recover a little bit," Price said. "Obviously the playoffs are a grind, you're playing every second day.

"Mentally it's taxing so being able to step away from the rink for a day and having a practice day to kind of fine-tune a few things is definitely beneficial."

Price may have some adjustments to make given that Tampa Bay has had the most sustained success against him this year. Lightning centre Tyler Johnson, who has a league-best seven goals in the playoffs, said they've taken advantage of second and third opportunities and made Price go east-west in his crease often.

Others didn't want to give away the secret or jinx how well they've done against Price.

"You try not to look too much into it, I guess, and think about it," winger Ryan Callahan said. "He's an unbelievable goaltender.

"He's obviously one of the best in the league. I can't put a finger on one thing one way or the other, but we just got to keep shooting, keep getting guys there. He's not an easy goalie to beat if he sees that shot."

Cutting down on second and third chances against Price is what Montreal must do better in front of its all-world goaltender.

"It's not just Carey who's got to stop the puck," Subban said. "As a five-man unit we've got to help make sure that they don't have the quality scoring chances to score. ... We're not going to break it down and talk about one specific player in the playoffs because the playoffs aren't about that."

Former Habs goaltending great Ken Dryden agrees. In an essay published in the Wall Street Journal, Dryden wrote the team must be better and not just rely on Price.

Notes — Centre David Desharnais rejoined the Habs in Tampa after being held off the team flight Monday because of a virus. He's expected to skate Wednesday morning. Therrien said he'd have to see how Desharnais is feeling before making a decision about playing him in Game 3. ... Injured defenceman Nathan Beaulieu skated with the team Tuesday but Therrien said his situation was the same. There's no timetable for his return. ... Lightning forward Cedric Paquette, who left Game 2 with an undisclosed injury, skated and said he felt OK. Tampa Bay coach Jon Cooper called him a game-day decision.