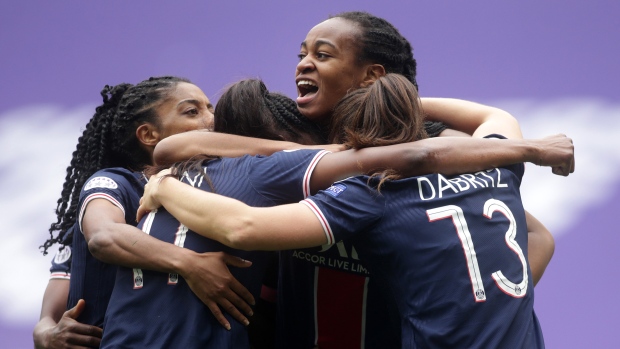 LYON, France — Paris Saint-Germain turned the tables on five-time defending champion Lyon, winning the return leg of their women's Champions League quarterfinal 2-1 on Sunday to reach the semifinal 2-2 on away goals.

Jordyn Huitema of Chilliwack, B.C., is a PSG forward and Toronto's Ashley Lawrence a defender for the club.

The Canadians, along with their PSG teammates, meet Barcelona in a two-leg semifinal April 24 nd May 1.

Toronto's Kadeisha Buchanan is a defender for seven-time champion Lyon, which was 31 games unbeaten in the competition.

Lyon entered the home leg 1-0 up from Paris and went further ahead with a goal from American striker Catarina Macario after just four minutes.

But PSG, which also handed Lyon a rare defeat earlier this season in the French league, showed resilience to hit back through midfielder Grace Geyoro midway through the first half.

PSG's winner came from an own-goal in the 61st minute from central defender Wendie Renard, who scored a penalty for Lyon in Paris and has netted 116 goals from the back for the club since her debut in 2006.

But this time Lyon's prolific captain scored in the wrong net as she tried to cut out Kadidiatou Diani's cross from the right, and diverted the ball past goalkeeper Sarah Bouhaddi.

PSG is on track to reach two Champions League finals, with the men’s side knocking out another defending champion in Bayern in the quarterfinals.