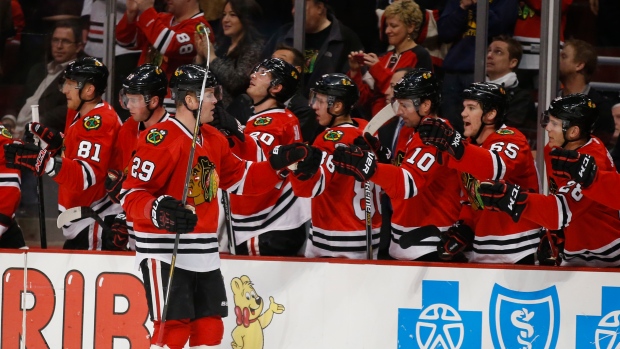 He did not say if they will play, however.

The series shifts to Chicago tied 1-1 after Tampa Bay rebounded from a loss in Game 1 to beat the Blackhawks 4-3 on Saturday.

Quenneville said Sunday he thinks Bickell is healthy after missing the first two games of the series. He was hurt in Game 7 of the Western Conference finals in Anaheim. The Blackhawks haven't disclosed the nature of Bickell's injury, but the forward said he passed the league's concussion tests.

Van Riemsdyk is coming back from surgeries on his left knee and right wrist. The rookie has not played for the Blackhawks since Nov. 16 but has been practicing with the team in anticipation of his NHL playoff debut.

Chicago has leaned heavily on its top four defencemen in the playoffs and will likely continue to do so. But the last two spots are open for discussion.

If van Riemsdyk does play, captain Jonathan Toews had some advice for him.

"Just go out there and keep it simple, do your best to phase everything out, play hockey," he said. "You're out there with five other guys. If you make a mistake, it's not the end of the world. We can help each other out. If it comes to that, we know he'll be ready. We'll be ready to help him out, ease the pressure a little bit."