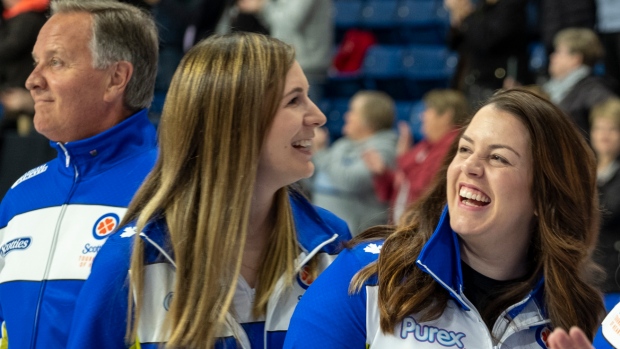 Nadine Scotland, lead for Alberta's Team Laura Walker, won't be attending this year's Scotties Tournament of Hearts inside the Calgary bubble and will be replaced by Rachel Brown, lead for Team Kelsey Rocque.

The 30-year-old Scotland recently announced on social medial that she is pregnant and is due in August.

"Recently we shared that Nadine is expecting, and with that as a driving factor, she has made the difficult decision to stay home from the Scotties bubble," said the team on Twitter. "Laura, Kate, Taylor and Shannon completely support her, though we will miss her dearly and the team will not be the same without her."

In her place, Team Walker is bringing on Brown, who joined Alberta's Team Kelsey Rocque this season. Dana Ferguson, who throws second rocks on Team Rocque, is also coming on board as an alternate. Brown, 34, and Ferguson, 33, have played together for nearly a decade and won their first Canadian championship together at the 2019 Scotties in Sydney, N.S., as members of Team Chelsea Carey.

"Rachel and Dana, joining us at lead and alternate respectively, come with a wealth of experience that we are excited to lean on. We are grateful that they have jumped aboard and look forward to competing in the Scotties bubble together," said Team Walker.