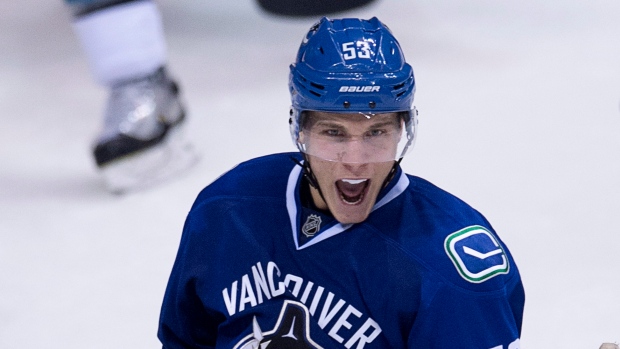 The Vancouver Canucks have dodged a serious injury to top prospect Bo Horvat, as Horvat’s shoulder is not broken following a heavy hit from Edmonton’s Tyler Pitlick.

“It’s good news. We were worried for sure, I thought it could be worse than that, but I think it’s just a contusion.” said head coach Willie Desjardins. “But it’s big that it’s not broken. It’ll be a couple days for sure and I wouldn’t be surprised if it’s a little longer. It seemed pretty sure.”

Horvat has impressed in the preseason and seems likely to have a spot on the Canucks opening-day roster. The 19-year-old is not eligible to be sent to the AHL, and a fourth year in the OHL may not be the best route for Horvat.

Forward Hunter Shinkaruk is heading to the AHL, as the Canucks assigned the 19-year-old to Utica on Friday. Shinkaruk turns 20 on October 13th.

Shinkaruk had a strong preseason, with two goals and two assists in four games, but Canucks brass felt the extra playing time and responsibilities in Utica would serve Shinkaruk well.

“I think that it’s a young guy and he’s got to get more of an all-around game to come up here,” said Desjardins. “I thought he was good offensively. I thought there were times that he showed really well. And that’s what we want out of him. We want to be a guy who loves to score, who’s quick on the attack – and I think he showed us those things. But I think he needs more experience at the pro level. He sat out last year for quite a bit of the year, so he’s been out a while. So to get his game to the best it can be, he needs a little bit more time.”

Desjardins admitted on Friday that Shinkaruk needed to improve his play away from the puck.

“I think it’s hard for young guys. There were a couple things defensively that maybe hurt him a little bit. What you want as a young player, is when you get here you want to be able to stay. And you don’t want to come up and lose your confidence and that could really hurt your career. I think he’ll get more confidence next time he’s up by playing in the AHL.”

Canucks close the preseason on Saturday night, against the Oilers. TSN1040 has the call at 7:00.