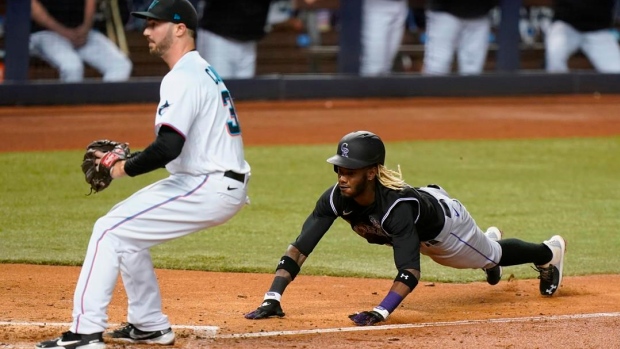 Charlie Blackmon had two hits and an RBI for the Rockies, who are a major league-worst 5-23 on the road — compared to 20-14 at Coors field.

Tapia has eight doubles in June after he hit four over the first two months of the season.

Winning pitcher Austin Gomber (5-5) allowed one run in five innings. The left-hander was lifted for a pinch-hitter in the sixth after he scattered five hits and struck out eight on 84 pitches.

“I was in the strike zone with all four pitches,” Gomber said. “I thought I had better control than command — got into some long at bats.”

Colorado manager Bud Black opted for the pinch hitter because the Rockies had runners at second and third when Gomber’s spot came up, and Connor Joe came through with an RBI groundout.

“Austin had one inning in him, we had a fresh bullpen and we thought that was the move to make,” Black said. “He threw well.”

The win was the 300th in Black’s tenure as Rockies manager. Black became the third Colorado manager to reach the milestone, following Clint Hurdle and Don Baylor.

“It’s a good round number but when I think of number one in Milwaukee and here tonight the players that have gone through here to help the Rockies win, I think about that,” Black said.

Rockies reliever Mychal Givens inherited two runners in the seventh and retired Jésus Aguilar on a drive to deep right for the third out. Givens pitched a scoreless eighth and Daniel Bard got his eighth save in 11 opportunities despite a hit by pitch, a single and walk. Bard retired Corey Dickerson on a grounder to third for the final out.

“I liked our energy again tonight,” Miami manager Don Mattingly said. “The at-bats were really good. We’re still making some mistakes that are hurting us. But I thought the at-bats were good. We didn’t seem to find any holes tonight for the most part.”

Run-scoring singles from Blackmon in the first and Yonathan Daza in the third gave Colorado a 2-0 lead.

“I just struggled to get in good counts with my fastball, especially early,” Garrett said. “I was nitpicking around the plate. I should have just challenge guys in certain situations and been in better counts."

Tapia scored on a passed ball in the fifth to put Colorado ahead 3-0. After his leadoff double against Miami reliever John Curtiss, Tapia advanced to third on Garrett Hampson’s infield single.

The Marlins got on the scoreboard on Jazz Chisholm’s RBI single in the fifth.

Adam Duvall’s two-run homer off Colorado reliever Tyler Kinley in the sixth got Miami within 4-3.

With his walk-free performance, Gomber continued his recent stretch of effective control. After walking 19 batters in his first five starts, Gomber has walked one or fewer in his last eight outings.

“I’m in a good spot right now with my delivery,” Gomber said. “My timing is good which is why I’m able to throw four pitches for strikes."

The Rockies rescheduled the retirement of Larry Walker’s No. 33 from Aug. 21 until Sept. 25 after the Hall of Fame announced Wednesday it was postponing this summer’s induction ceremonies until Sept. 8, allowing for fans to attend. Walker will enter as a member of the 2020 Hall class, an honor that’s been delayed due to the pandemic.

The Sept. 25 celebration at Coors Field will feature speeches from former players and a Larry Walker Hall of Fame Bobblehead giveaway.

Rockies: As expected, 1B Matt Adams (right elbow sprain) was placed on the 10-day injured list. Adams felt discomfort after his second plate appearance Tuesday and Black immediately sensed that Adams would miss extended time. ... SS Trevor Story (elbow) could be activated Thursday depending on his response to additional workouts Wednesday.

Marlins: OF-1B Garrett Cooper (lumbar strain) was placed on the 10-day injured list. ... IF Miguel Rojas (left index finger fracture) is hitting off the tee and soft tosses. The timetable on Rojas’ return depends on pain tolerance as he intensifies baseball activities.