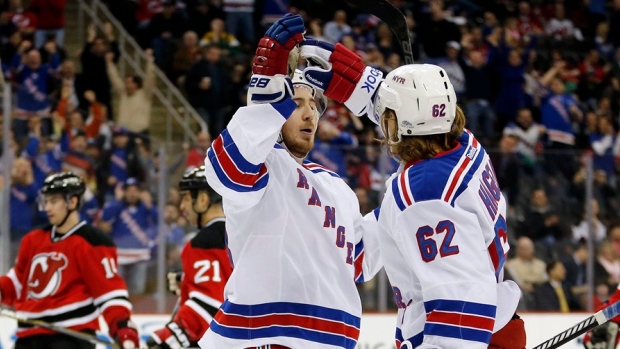 NEWARK, N.J. - There wasn't much celebrating after the New York Rangers won the Presidents' Trophy for the best regular-season record for the third time in franchise history.

The postgame activity after the Rangers 4-2 win over the New Jersey Devils on Tuesday night was businesslike, from congratulating goaltender Cam Talbot on the ice to talking about heading into the playoffs with home-ice advantage.

It was good to get the job done, but there is more to do.

"It's not an easy thing to do," coach Alain Vigneault said. "You look at the teams still fighting to get into the playoffs. It's a challenging thing. For our group, it's one thing in the direction that we're looking to get to. I'm very proud of our group but we all know that we are going to be judged by what we do in the playoffs. So this is a first step and we're going to get ready for the next one."

New York won't know who it wlll face in the opening round of the Eastern Conference playoffs, but Game 1 will be at Madison Square Garden next week.

The Rangers never trailed against the Devils after getting goals from Kevin Hayes and Ryan McDonagh in a 47-second span in the first period. Talbot made 19 saves and James Sheppard and Carl Hagelin added third-period goals as the Rangers swept the four-game season series with New Jersey.

"We battled hard all season long to get to this point but we know that the job's not finished yet," said Talbot, the backup who played a major role this season by posting a 17-5-3 record since Feb. 4, when starter Henrik Lunqvist was lost for nearly two months with a neck injury.

The win was the Rangers' fifth straight — four with Lundqvist in net — and it improved their record to 52-21-7 for 111 points. The 52-wins ties the franchise record and the point total is one less than that franchise mark, both set in 1993-94, the last time they won the Stanley Cup.

"It is a great accomplishment. Like any team, we had to handle adversity, injuries, ups and downs, travel, everything that goes about an NHL season," McDonagh said. "For us to clinch and say we won the regular season is a huge confidence boost. It's a reassurance of what this team is capable of."

The Rangers will be looking to return to the Cup finals for the second straight year. They lost the final to the Los Angeles Kings last season.

The Rangers never trailed in this game but it was nothing like Saturday's 6-1 rout of New Jersey in New York.

Despite being outshot by a 40-21 margin and having to kill off seven penalties, the Devils were right in the game until Hagelin scored into an empty net with just under than 2 minutes to play.

Sheppard have given the Rangers a 3-1 lead midway through the third period, deflecting Dominic Moore's shot past Schneider for his seventh goal of the season.

Bernier closed the gap to a goal less than a minute later, with a backhander that Talbot originally stopped. As the puck lay in the crease, the goaltender and Derick Brassard scrambled to clear the puck but Talbot kicked it into his own net.

Talbot was outstanding earlier in the period, stopping Adam Henrique twice and and Scott Gomez in close with a backhander to preserve the Rangers' 2-1 lead.

Hayes gave the Rangers the lead at 13:45 of the first period with his 16th goal of the season. Devils defenceman Eric Gelinas turned the puck over behind his net and Martin St. Louis poked the puck out front to Hayes for a shot past Schneider.

McDonagh doubled the margin less than a minute later with a goal just 7 seconds after Jacob Josefson was sent off for hooking. Derick Brassard won the ensuing faceoff, and Hayes and Keith Yandle moved the puck to the Rangers' captain from the left point that beat a well-screened Schneider.

The Devils, who had only two shots in the opening 17 minutes, got on the board with their third. With Tanner Glass of the Rangers in the penalty box, Bernier found Elias alone between the circles for his 12th goal of the season.

"I think we got in penalty trouble," Devils forward Mike Cammalleri said. "It's tough to get a flow and a momentum. When we did get to play them 5-on-5, we did pretty well."

The Rangers had a two-man advantage for 1:27 in the opening minutes but only managed one shot on goal. It foreshadowed a night in which they converted on 1 of 7 extra-man chances.

NOTES: Rangers F Mats Zuccarello was scratched with general body soreness. Sheppard replaced him in the lineup. ... Injured Rangers D Kevin Klein, who has not played since Mar. 11, had X-rays and is coming along, Vigneault said before the game. ... In addition to 1993-94, the Rangers also previously won the Presidents' Trophy for the 1991-92 season. ... Devils C Stephen Gionta missed his third straight game with back spasms. ... Devils F Tuomo Ruutu played in his 700th NHL game. ... Devils Jacob Josefson was called for three of the team's seven penalties.