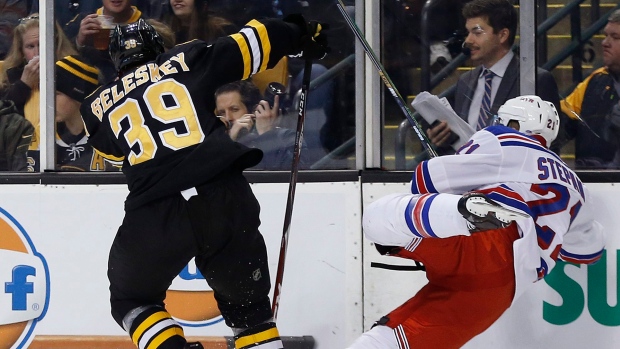 Stepan injured the ribs in Friday's loss to Boston. He has six goals, six assists in 23 games this season.

The Rangers host the Carolina Hurricanes on Monday night.

The Rangers called up Jayson Megna from their American Hockey League affiliate. Megna had 12 points and eight penalty minutes in 21 games with the Hartford Wolfpack.

Stepan had been examined by a doctor Saturday, a day after he was injured in New York's 4-3 loss to the Boston Bruins. The centre was checked by Bruins left wing Matt Beleskey after making a pass in the second period.

Beleskey was not penalized for the hit and he did not receive supplemental discipline from the NHL's Department of Player Safety.

"Those are things that are very tough for coaches and management to comment on. Was it a late it? In our opinion, it definitely was. Should we help (Stepan) moving forward to better protect himself? We're going to try to do that." Vigneault before Saturday's game against Philadelphia.