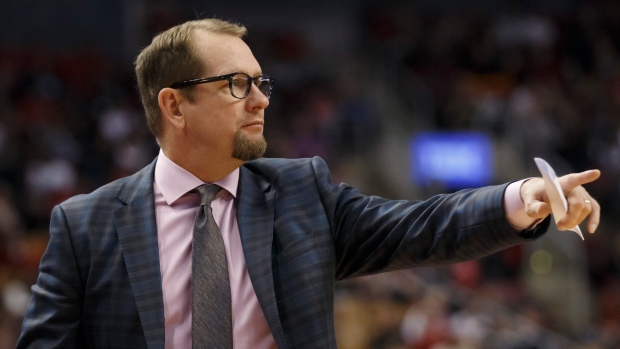 TORONTO – Training camp is the time of year when most players earn glowing reviews. It’s the NBA’s feel-good season.

For most teams, reality sets in sometime between late October and early November, but until then positivity reigns supreme.

With that in mind, Raptors head coach Nick Nurse caught some people by surprise in assessing his newest players on Wednesday.

Initially Nurse was asked if his team had found its identity yet, with less than a week to go before opening night. To little surprise he spoke mostly about defence – the team’s calling card during its championship run last spring.

Sure, they’ve lost two of their better defenders in Kawhi Leonard and Danny Green, but their returning core should still be able to pride itself on that end of the floor. Defence remains their priority.

So, naturally, it must be helpful to add a couple new players that come with defensive reputations in forwards Stanley Johnson and Rondae Hollis-Jefferson, right?

“Nope, nope, nope,” Nurse responded. “Those guys have not understood A) how hard we play [and], B) our schemes [and] that defence is a priority for them, etc. We’ve got some work to do with that crew. I tell them there [are] a couple spots, come Tuesday night there [are] a couple spots there open if somebody wants them. And I keep telling [them] show me you’re going to play defence, show me you’re going to play hard, show me you understand our coverages. Then whatever you do on the other end you’re going to get opportunities just because of who you’re on the floor with, and they’ll come to you, you don’t have to come down and occupy 95 per cent of your mind with how you’re going to break down and get your next shot. It’s not going to get you on the floor right now. So we’ve got some work to do. We’ve got to find who’s going to blend in quickly defensively with this crew.”

A couple minutes later, while praising Fred VanVleet’s effort in boxing out bigger players during the postseason, Nurse circled back to the newcomers.

Whether this speaks more to Nurse’s straight-forward and at times blunt approach – he even called out Leonard for coasting in the middle of last season – or just how unimpressive Johnson and Hollis-Jefferson have been in camp, the message is clear.

It’s also not entirely out of the blue. Nurse hinted that some of the newer guys were behind in picking up the system or were making mistakes on defence in Japan last week. You could also read into how they’ve been used in his preseason rotation so far.

Even with six of the regulars sitting out against the Bulls on Sunday, Johnson was the ninth Raptors player to check in. Hollis-Jefferson was the 11th or 12th (he checked in at the same time as Devin Robinson, who is in camp on a partially guaranteed Exhibit 10 deal).

Through three exhibition games, Johnson’s played 12.4 minutes per contest (ranked 14th of the 20 players on Toronto’s training camp roster) and is shooting 1-for-10. Hollis-Jefferson is averaging 12.0 minutes (16th) and has committed six turnovers, fourth-most on the team.

There’s always a learning curve when players join a new team, particularly for guys like Johnson or Hollis-Jefferson, who have spent either all or most of their NBA careers with one organization. However, as league veterans – both forwards are going into their fifth season – the expectation is that they should be further along, which explains Nurse’s frustration.

Johnson was drafted eighth-overall by Detroit in 2015 and spent his first three and a half seasons with the Pistons before being traded to New Orleans last February. Hollis-Jefferson, his college teammate at the University of Arizona, went 24th in that same draft and has only played for Brooklyn.

Neither has lived up to early expectations and both come off of their rookie contracts looking to re-establish themselves on smaller, short-term deals. Their jump shots and offensive games haven’t developed the way their former teams had hoped, but their age (Johnson is 23, Hollis-Jefferson is 24), upside and defensive profile appealed to Toronto, who had limited resources with which to replace Leonard and Green over the summer.

For the Raptors, the commitments were low-risk. They signed Hollis-Jefferson to a one-year, $2.5 million contract and Johnson to a slightly pricier 2-year, $7.5 million deal, with a player option in the second season.

Both contracts are fully guaranteed for this season, which generally means those players are a lock to make the team. However, because the Raptors aren’t likely to reach the luxury tax threshold this year, they have enough wiggle room to waive a guaranteed contract and take the cap hit if they feel like somebody else is more deserving of that spot. That seems unlikely, given they still have three open roster spots to fill.

That said, Nurse has put Johnson and Hollis-Jefferson, as well as the rest of his team, on notice here: defend and play hard or open the season on the bench.

There are eight names he has frequently brought up as locks for the rotation and even potential starters – Kyle Lowry, Pascal Siakam, Marc Gasol, VanVleet, Serge Ibaka, Norman Powell, OG Anunoby and Patrick McCaw. What do those guys have in common? They’re all holdovers, they’re all champions, and they’re familiar with the system and know what Nurse expects.

It’s clear those are the players he trusts, at least for now. Still, they’ll use 10 guys on most nights, meaning – as Nurse alluded to – there are a couple spots up for grabs. If the newcomers continue to underwhelm and Nurse opts for familiarity, Chris Boucher and Malcolm Miller – holdovers on non-guaranteed deals – could have a real shot at cracking the rotation. Undrafted rookie Terence Davis – one of the few new guys that has impressed in camp – is also in the mix.​