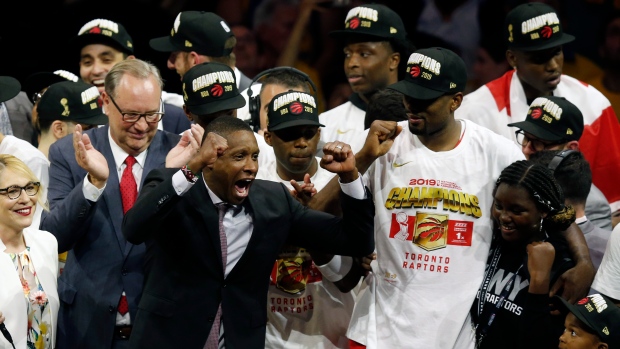 Toronto Raptors president Masai Ujiri said Tuesday he sees himself staying long-term with the franchise despite reports of outside interest.

"Yes. For me it's always been about Toronto," Ujiri said at his season-ending availability. "I love it here. My family loves it here. My wife loves it here, which is important. My kids are Canadian. I want to win more... In my mind, I'm here."

Reports surfaced shortly after the Raptors won the NBA title earlier this month that the Washington Wizards planned to try to lure Ujiri from Toronto, though Wizards owner Ted Leonsis later denied that report.

When it comes to the most sought-after member of the Raptors, Kawhi Leonard, Ujiri said he is confident in the team's chances of keeping the star and noted the team will be in a holding pattern on their free agency plans until Leonard makes his decision.

"We'll wait. He's our player and he's a superstar on our team and we'll wait on that," Ujiri said.

The Raptors president added he had texted with Leonard as recently as Monday night and had spoken with Leonard's uncle earlier on Tuesday.

Masai's spoken to Danny Green (UFA) and Marc Gasol (PO), said they understand that Kawhi is the first domino, but they all want to run it back. "We're really approaching it like we want to bring everybody back. That's a priority for us."

The 48-year-old Ujiri, who took over control of the Raptors in 2013, has two years remaining on his contract. Away from the championship he architected this past season, Ujiri's Raptors squads have reached the postseason in each of his six seasons with the club, and have put up 58 and 59 regular-season wins, respectively, the past two years.

Prior to joining the Raptors, Ujiri served as general manager of the Denver Nuggets (2010-13). For his work with the Nuggets during the 2012-13 season, he was named NBA Executive of the Year.