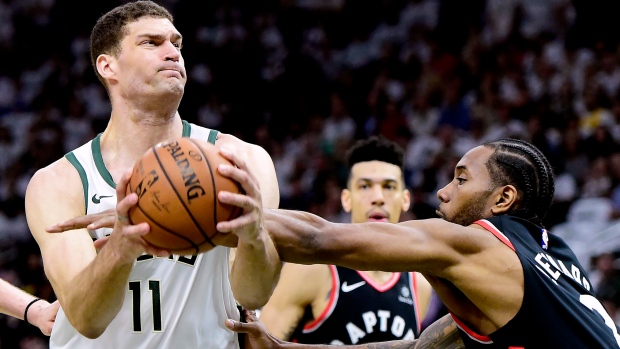 With the National Basketball Association on hold for the foreseeable future, TSN and Sportsnet are airing the entirety of the Toronto Raptors’ playoff run to the 2019 NBA title. You can watch Game 1 of the Eastern Conference Finals against the Milwaukee Bucks on Wednesday night on Sportsnet at 8pm ET/5pm PT.

It’ll forever be known as ‘the shot’

Kawhi Leonard’s buzzer-beating long-range shot in Game 7 propelled the Toronto Raptors into a place they had only ventured once before … The Eastern Conference finals.

“It was cool, all the fans, the team, everybody around, it was crazy,” Kyle Lowry said after the game. “It was a good emotional moment for everybody to be there and just kind of a sigh of relief and enjoyment - like a 'phew!' It was great. It was a pretty awesome moment.”

As surreal as the moment was, the Raptors didn’t have a lot of time to soak it in. Their next opponent, the Milwaukee Bucks, were waiting in the wings after disposing of the Boston Celtics in five games.

On paper, the Raptors had the star power to match the likes of the Orlando Magic and Philadelphia 76ers, but now came the toughest opponent yet.

Giannis Antetokounmpo, the eventual 2018-19 NBA MVP, led his team to the best record in the league at 60-22 and were the favourites going in.

"Obviously they're great. They have a different style of play," Danny Green said. ”(They are) more faster pace. Definitely up and down, probably more three-point shooting, more guys on the perimeter but I think it's a style that we're used to playing or able to adapt and adjust to well. Hopefully we do. It's going to be a ... track meet."

The Raptors go into this series as the clear underdog but hope to lean on their playoff expertise. Leonard is a battle-tested playoff performer and provides Toronto with the X factor.

Will it be enough?

Here's what TSN's basketball analysts had to say about Game 1.

Kia Nurse
“Just when we thought ‘The Shot’ erased all of Toronto’s demons… the Game 1 curse was alive and well. The Raptors had two days to change their mindset and prepare for a tough Bucks squad that had an extra week of fine-tuning. For 3 quarters, Toronto didn’t miss a beat, but seemed to run out of steam in the 4th. Did a long series and big minutes finally catch up to them?”

Kate Beirness
“Unlike the unpredictability of the majority of this playoff run, I remember this game playing out the way a lot of people thought it would. Although they started well, the Raps looked tired after their epic 7 game series. On the flip side, the Bucks were a little rusty after only playing 9 games to this point but pulled it together just in time. The positive, the freak was somewhat kept in check and there was more than enough time to turn things around.”

Kayla Grey
“When people ask why Kyle Lowry is the greatest Raptor of all time, this game is high on the list of tape you would show them. One of his greatest performances  in the postseason and it all went to waste. The Raptors lead most of the way but got killed on the offensive glass in the final ten minutes. You could tell the team felt this one because it was a winnable game. Now usually, when you hear about a Bucks victory  your mind goes right to Giannis Antetokounmpo. Yeah, not here. This was all… Brook Lopez? Lopez was everywhere and hit some big shots late.”

Jack Armstrong
“This was a competitive, winnable game. Raptors played a bit tired. Looked like a team that was exhausted from the grind of a hard fought Philly series. Raps D was good enough.”

Josh Lewenberg
“Missed opportunity. This was the Raptors’ worst loss of the playoffs, in my opinion. Not Game 1 vs ORL. Not the blowouts vs PHI. Not even the upcoming Game 2 debacle vs MIL. The Raps played 1 of their best halves ever, got 1 of Kyle Lowry’s best games ever, and they threw it all away with an abysmal 4th quarter. Given how good the Bucks were and how tough this series was going to be, I feared this would haunt them.”

Leo Rautins
“The Raps owned game 1 vs. the Bucks until the end, when Milwaukee finished the game on a 10-0 run! A few things stood out - like Brook Lopez’ 13 in the 4th & a career playoff-best 29 PTS - and Bucks coach Mike Budenholzer’s post game remark: “we feel like if we stick with what we're doing good things will happen for us.'' The Raps will never see Lopez do that again, but they will see Coach Bud stick to what they do no matter what - and it cost them!”

Rod Black
“1 vs. 2, just the way we wrote it at the beginning of season. Dont want to give it away - aww hell you know already - this was a game the Raptors had in their claws and let slip away in the 4th. And it wasn't the “Freak show”, but the “Brook book”. Lopez carried the deer with 29 and 11. Kyle was outstanding with 30 and scored the only Raptor FGs in the 4th. That was the good news. The bad news was that he was the only Raptor to get a FG in the 4th. Lots of excitement in the arena. Fans were awesome, except for those two suited clowns in the front row during the second half. Wait, that was Jack and me! Loved listening to Nick challenge the refs. Watching Kyle's intensity meet the moment. And of course the battle of the Titans - Giannis and Kawhi. Bad news was - we couldn't have a Milwaukee beer...work night.”