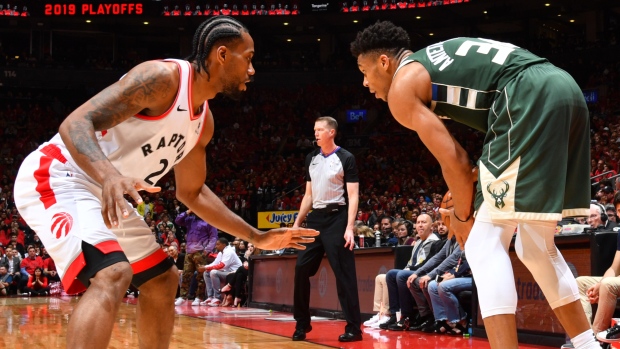 With the National Basketball Association on hold for the foreseeable future, TSN and Sportsnet are airing the entirety of the Toronto Raptors’ playoff run to the 2019 NBA title. You can watch Game 4 of the Eastern Conference Finals against the Milwaukee Bucks on Saturday night on TSN4/5 at 8pm ET/5pm PT.

Game 3 wasn’t an elimination game, but it was about as close as you can get to one.

In what was effectively a win-or-go home situation, the Toronto Raptors left it all on the hardwood and gave everything they had to earn a 118-112 double overtime win over the Milwaukee Bucks.

As he has been all playoffs, Kawhi Leonard was the driving force. The Raptors’ best player was magnificent once again with a gritty 36-point, nine-rebound effort in 52 minutes of action to cut the Bucks' series lead to 2-1. Leonard kept Toronto’s season alive by emptying the tank, but many wonder how much he has left in it.

Leonard appeared to favour his leg at times during Game 3 and received treatment on it long after the final buzzer sounded. Still, he told reporters he expects to be fine going forward.

"I mean it's 52 minutes and it's in the playoffs so you definitely feel it. When you play 30 minutes, you feel it still. [I've] just got to not worry about it, get my treatment and move on to the next one,” he said.

His teammates think he’ll be okay, too.

"You're on the floor, you're good enough," said point guard Fred VanVleet. "We go out there and go to war for each other. To see him out there battling, and obviously (he) wasn't moving very fast — but if he's out there, he's good enough."

As good as Leonard was, the Raps are going to need more out of VanVleet – a lot more.

‘Steady Freddy’ was anything but, being held to just three points on a disastrous 1-of-11 from the field, though he did have six assists. Despite averaging 11.0 points for the season, VanVleet has been held under 10 points in 14 consecutive contests dating back to Game 1 against the Orlando Magic.

VanVleet was far from being the only one to have a rough night.

Holding Giannis Antetokounmpo in check was a big reason Toronto was successful in Game 3. After combining for 54 points in the first two games, Antetokounmpo was limited to just 12 on a dismal 5-of-16 from the field before fouling out in the second overtime period. He’ll almost certainly be far better in Game 4 to help the Bucks bounce back, something they’re tops in the league at doing.

The Bucks have lost 23 times in 2018-19, regular season and playoffs combined. Coming off defeats they have a 22-1 record, the best mark in NBA history, according to the Elias Sports Bureau.

"What bothers me is that we had a chance," Antetokounmpo said. "Even though we didn't play well, we still had a chance. If we played a little bit better we probably would have won this game and we'd be up 3-0.”

No NBA team has ever come back to win from a 3-0 series deficit, but 2-1 is a whole different ballgame.

The Raptors have a lifeline.

Here's what TSN's basketball analysts had to say about Game 4 versus the Bucks:

Josh Lewenberg
“Welcome to the world, Fred Jr. and welcome to the playoffs Fred Sr. VanVleet was 1-for-11 in Game 3. He was shooting 26% in the playoffs. He seemed truly unplayable. Then, in between Games 3 and 4 his son was born. Coincidently, or not, that was a turning point. He had 13 points on 5-6 FG in G4 and the rest is history. From playoff goat to playoff GOAT.”

Jack Armstrong
“Bench came through in a big way with 48 points. Raptors offensive attack was stellar, with 32 assists and only 11 turnovers. The key to beating the Bucks is keeping them out of transition. Mission accomplished.”

Kate Beirness
“After watching Kawhi put forth another larger than life performance in Game 3, which probably saved the season, Leonard looked human in this one, but that was ok!
This was a full team effort lead by who other than Kyle Lowry, and with everyone stepping up, I remember thinking the Bucks were in serious trouble!”

Leo Rautins
“One thing the Raps have never done in these playoffs, regardless of their situation, is crack! The Bucks showed stress after their game 3 double OT loss, and in game 4, Toronto rolled. Milwaukee looked broken! As bad as it may seem, it also just got worse - because the Raps bench, led by Steady Freddy, is back. Big!”

Rod Black
“The “Quench the Bench” game. Finally, the Raptors supporting cast was able to give Kawhi a break. Lasting “Rodservations” from Game 4: Kyle was a killer; Norman was stormin'; Gasol was a force; Serge Ibaka played rim wrecker; Drake played coach masseuse; and Fred VanVleet finally arrived to the playoff party. Baby boy born a couple days earlier, and Fred handled the rock as beautifully as he would a newborn. "Zero sleep, have a lot of babies, and go out there and let loose," said Papa FVV. Suddenly, players around the league taking notice and working on new off court drills. ;)”

Kia Nurse
“Sharing is caring. We all knew winning this series was going to take a complete team effort. The bench mob finally found success as a unit, Gasol had his second consecutive all around impactful game, and Lowry paced and lead the team as usual. Kawhi’s shoulder got a much-needed break. Not his typical load management, but it’s the playoffs, this will have to do.”

Kayla Grey
“Ball movement. Everybody eating. Hitting open shots. Consistent bench. Kyle Lowry everywhere. Chef’s kiss. Game 4 the Raptors were exactly who we thought they were. Coming off of the marathon that was game 3, Milwaukee just looked gassed - top to bottom. There was so much talk about Milwaukee’s depth coming into this series, and while valid, here is where Toronto proved that their depth was nothing to play with either. The real hero in this game? Fred VanVleet Jr. who was born right before the game and his arrival was literally the last we heard of his old man’s slump. VanVleet Sr. had 6 assists and was perfect from three. Kids, man.”