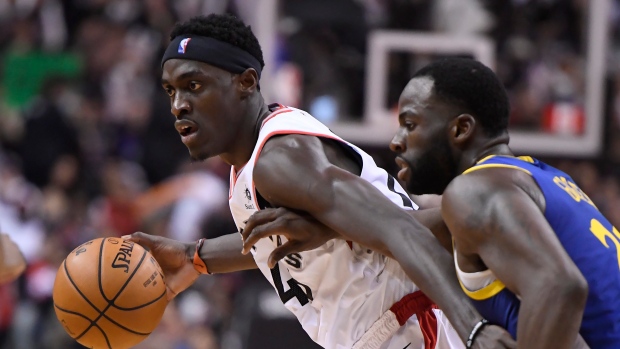 With the National Basketball Association on hold for the foreseeable future, TSN and Sportsnet are airing the entirety of the Toronto Raptors’ playoff run to the 2019 NBA title. You can watch Game 4 of the NBA Finals Friday night at 8pm ET/5pm PT on TSN1/4, TSN Direct, and streaming on TSN.ca..

Two wins away. The Toronto Raptors climbed ever closer to their first NBA title after their 123-109 win over the Golden State Warriors in Game 3 of the NBA Finals. The Raptors overcame the Warriors’ home court advantage and Steph Curry’s playoff career-high 47 points to take a 2-1 series lead with the win.

While Curry was spectacular for the Warriors in the absence of injured teammates Klay Thompson and Kevin Durant, the Raptors had their own star putting in a Herculean effort in Fred VanVleet.

VanVleet played the entire second half save for 52 seconds of garbage time, keeping glued to Curry on the defensive side of the court and scoring 11 points, including a dagger three-pointer – a 28-foot heave at the end of the shot clock to put Toronto up 13 points with less than two minutes remaining.

“Fred has a heart that I don’t know how it fits in his chest. He has a huge heart,” Marc Gasol said after game. “He fights, he’s scrappy, he’s steady. One heck of a player.”

“Favourite player right there in the NBA for me,” said Pascal Siakam. “I don’t know if he likes that [nickname], but Steady Freddie, you know? He’s always calm, always cool, too cool for school. That’s my guy.”

Next up was a chance to take a commanding lead in the NBA Finals in Game 4 but the Warriors had some reinforcements on the way. Thompson, who was injured in the Warriors’ Game 2 win over the Raptors, will return to the lineup for the Warriors. But will it be enough to slow down VanVleet and Toronto, with an NBA title within their grasp at this point in the series?

Here's what TSN Basketball Analysts had to say about Game 4:

Kate Beirness
“One for the ages! There is only one thing to talk about when it comes to this game… #2! Not only was this the best performance of the series, it will do down as one of the best performances in NBA Finals history. Watching Kawhi come out of the half and completely take over the game was simply incredible. And no word of a lie, it was the first time I thought, ‘OMG the Raps are going to be champs!’”

Kia Nurse
“Kawhi Leonard added another unforgettable performance to one of the best individual post-season runs the game has seen. Single handedly keeping the Raptors in the 1st quarter to then become unconscious in the 3rd putting up 17pts. He finishes the game with a monster double double and not a single display of emotion. Been there, done that…on to the next one.”

Rod Black
“The “Kawhian Game”, which was almost the “Crying Game” the way the Raptors played in the first half. While the Raps were treading in quicksand - the Dubs played desperate and determined. Klay was back and he shined with 14 through two quarters. But then the TSN turning point - halftime. Kawhi went back to the locker room - re-adjusted his inner electronics and then went full Cyborg mode. He was unstoppable. Untouchable. Unbelievable. This was exactly why the Raptors got Kawhi in the first place. A 36 and 12 masterpiece aided by a Serge surge - 20 huge points - and the Raptors are one win away from history. Whispers of a KD return, but I just had a feeling - this was already over. The champs looked like zombies walking off the floor heading back to Toronto.”

Jack Armstrong
“Road D is elite holding Warriors below 30% from 3. Klay is back with 28 points, but Raps dictated the terms. Kawhi rock solid with 36 & 12. Serge Ibaka comes alive with 20 & 2 blocks. Raptors one win away from their first NBA Title!”

Kayla Grey
“As much as you would like to just step right over the first half in this one - you just can’t. It was ugly. But also important because it set the stage for one of the most unlikely wins in franchise history. The second half was just different. This game had “game 7 energy” to it. Both teams saw the fate of the championship being played out in the 3rd and 4th quarters. It was scrappy. Kawhi was unbothered and Serge Ibaka was just on. Toronto fought with blood, sweat and Fred VanVleet’s tooth. Again, they left that joint as quiet as Warriors fans did. Business was not yet finished.”