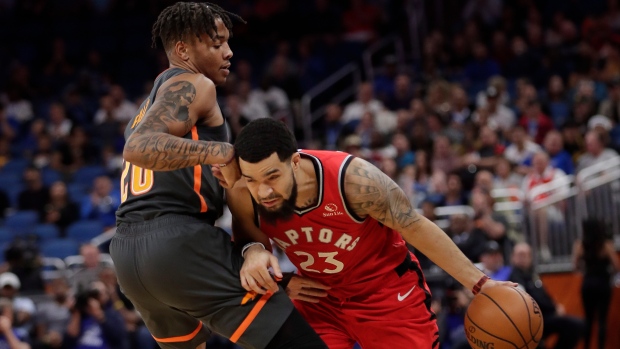 TORONTO – With the calendar turning to December – their busiest and most difficult month of the regular season – the Raptors are getting healthy at an opportune moment.

On Monday, a day after getting Serge Ibaka back from the ankle injury that kept him out of the lineup for nearly four weeks, Kyle Lowry returned to practice for the first time since fracturing his left thumb in early November.

He’s still not fully healed, according to the all-star point guard himself, and the plan is to take things day-to-day from here. However, he should be back soon, which is good news considering five of Toronto’s next six games come against top-10 teams.

For the bulk of his eight-year Raptors tenure, a month without Lowry – the team’s most, or at worst second-most, irreplaceable player – would have spelled disaster. Now, not only have they survived in his absence, they’ve actually thrived.

They’re 9-2 in the games he’s missed – and 8-2 without him and Ibaka – including signature wins over the Lakers on the road and the 76ers and Jazz at home, where they remain unbeaten.

“I’m going to be honest with you, I didn’t see this coming,” Ibaka admitted, and he’s not alone.

There are plenty of reasons for the Raptors’ shorthanded success this past month. Pascal Siakam continues to look the part of a franchise cornerstone. Norman Powell has filled in admirably as a starter. The subs – Rondae Hollis-Jefferson, Terence Davis and Chris Boucher – have been a revelation and given Nick Nurse more depth than even he thought he had. Then there’s Nurse, the Eastern Conference Coach of the Month for October and November.

At the centre of it all is the man most directly responsible for filling Lowry’s shoes, Fred VanVleet.

In nearly 38 minutes per game over the last 11 contests, VanVleet has averaged 21.2 points and 7.5 assists, 2.4 steals and only 2.7 turnovers while shooting 44 per cent from the field and 40 per cent from three-point range on 7.5 attempts.

“There’s always room for improvement for me, I’m never satisfied, but yeah, I feel like I’ve been playing well,” VanVleet said after another standout performance – 21 points, five rebounds, 11 assists and zero turnovers – in Sunday’s win over Utah. “But, honestly, those days are kind of behind me – like, I don’t really have anything left to prove. I’ve shown it by now. The only thing I haven’t done yet is dunk.”

At just 25, turning 26 in February, VanVleet’s resume is filling up fast.

He fought his way onto an NBA roster after going undrafted. He helped lead Raptors 905 to the G League title as a rookie. He was a finalist for the Sixth Man of the Year award during his sophomore campaign, earning him his first big contract that summer. Then, in his third season, he became an NBA champion and even got a Finals MVP vote.

Still, there were a couple of important questions hanging over his head as he entered his fourth year – a crucial one for the soon-to-be free agent: is he a full-time starter and can he lead a team?

Over the last two years, the Raptors are 38-9 with VanVleet in the starting lineup, either filling in for Lowry or playing alongside of him. He’s certainly proven he’s well suited for that role, even if it means going small in the backcourt. Now, in an extended audition as the sole point guard, he’s showing he can run an elite NBA team.

Not only has his production been Lowry-like, but so has his presence and leadership, which explains why there hasn’t been much of a drop-off without one of the league’s most valuable players at its most important position.

Few expected the undermanned Raptors to have this much success, or for some of the guys at the end of their bench to step up as they have, but those that are closest to VanVleet aren’t surprised by his recent play in an expanded role.

“I always knew the type of player he was and his leadership and being able to take control of a team and making sure that we're all in the right spot,” said Siakam, VanVleet’s closest friend on the team “I think it's always good to have him out there, getting us calm and making sure that we execute. And obviously he's always shot the ball well. He's playing great basketball right now. It's unbelievable to see. I'm happy for him.”

“I think Freddy is just a guy that's going to continue to get better — he's going to continue to grow,” said Lowry, who has been a mentor to VanVleet since Toronto signed him as an undrafted free agent in 2016. “I think his level of confidence, his rhythm, is at an all-time high right now. I said that to him yesterday. I said, 'You're in a groove.' He's in a real good groove. Everything he does. His shots are going in. Every shot he takes, everything he does, is just in a nice rhythm and a groove. And now the point for him is to continue it no matter what. And I think he will.”

Once Lowry returns, he and VanVleet will reprise their roles starting in an undersized backcourt together and splitting the point guard duties. But if there was ever any doubt that VanVleet could be a starting point guard in this league, any temptation to typecast him as a career backup or sidekick, he silenced it over these last few weeks. He may have made himself some more money in the process.

VanVleet is in the final year of his contract. Unlike Lowry and Siakam, who recently signed new deals with Toronto, he’s not eligible for an extension, meaning he’ll be an unrestricted free agent this coming summer.

The market is hard to predict. A bunch of teams will have money to spend and in a weak free agent class, VanVleet should be one of the most coveted players out there. However, several teams will be sitting on their cap space or looking to sign one-year deals in anticipation of the following summer, when Giannis Antetokounmpo and other star players could be available.

Every decision the Raptors are making, including the Lowry and Siakam extensions, are being made with the summer of 2021 in mind. They’re juggling a few priorities. They want to remain competitive through next season and build a promising young core that a star player might feel compelled to join – and they believe they have that in Siakam, VanVleet and OG Anunoby. But they also need to make sure they have the means (assets and cap flexibility) to go out and acquire that star.

The Raptors want to keep VanVleet, but how much are they willing and able to offer while still maintaining enough space to chase Antetokounmpo or another prominent free agent the following summer? How much will he cost if another team is all-in on him? Malcolm Brogdon got $85 million over four years from the Pacers last summer – that could be the baseline for VanVleet at his current pace.

The 25-year-old could be raising his price tag with each passing game, especially over this last month, but that’s a good problem for the Raptors to have and something they’ll happily worry about in seven months from now if it means VanVleet continues to blossom in front of their eyes.

“I think he's a heck of a player, man,’ Nurse said. “He guards, he shoots, he runs the team, he's a winner, makes big shots. I just think his numbers and minutes are way up because the opportunity presented itself and like a lot of guys he's taking advantage of the opportunity.”

“I’m just trying to continue to be better and be a leader on this team and help contribute to wins,” VanVleet said. “I’m most happy with the wins so that’s all that matters.”