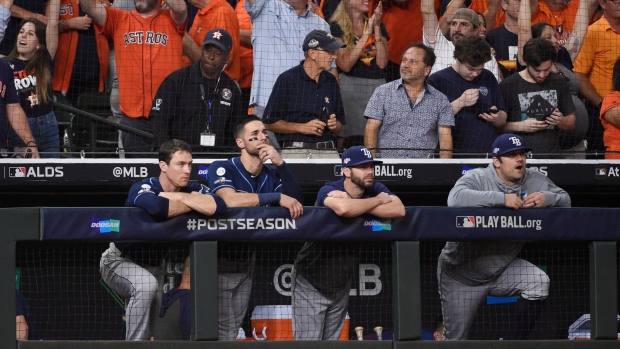 The overachieving franchise with baseball's smallest payroll returned home from losing to the Houston Astros in the AL Division Series confident that getting its first taste of post-season success since 2013 will make it stronger moving forward.

"We would have loved to be World Series champs, but reaching the ALDS for the first time in six years is a right step forward," defensive whiz Kevin Kiermaier said.

After compiling the best record among major league teams failing to make the playoffs in 2018, the Rays improved from 90 to 96 victories this season to make the playoffs for the fifth time in club history. They beat Oakland in last week's wild-card game, then survived two more elimination games to force a decisive Game 5 against the heavily-favoured Astros in the ALDS.

Not bad for a budget-minded franchise that ended the season with a payroll of just over $66 million.

"I'd make the argument we were as fun a team to watch over 6 1/2 months as any team in baseball," manager Kevin Cash said.

"We may have surprised a lot of people, but we didn't surprise ourselves," second baseman Joey Wendle said. "I think from Day 1, we had a lot of confidence in each other."

The Rays won 11 of 14 games to begin the season and went a franchise-best 17-8 in September to finish with 90-plus victories for the seventh time since 2008. The Los Angeles Dodgers (eight), New York Yankees (seven) and Boston Red Sox (seven) are the only other teams that have done that as often over that 12-season stretch.

They did it despite injuries sidelining Tyler Glasnow and 2018 AL Cy Young Award winner Blake Snell for big chunks of the year. Only three players — pitcher Charlie Morton, shortstop Willy Adames and outfielder Tommy Pham — remained on the active roster the entire season.

"This is a great taste for a lot of our guys of what's to come in the future, and we want everyone to remember what it's like to take that field in the post-season," Kiermaier said. "Hopefully that drives guys in the off-season, motivates them, whatever you want to call it, and hopefully we're back again next year."

With a good shot at making a deep run, said Glasnow — the losing pitcher in Games 1 and 5 of the ALDS.

"We're a really good team. I think the success we had this year proved to a lot of us how good we are," the 26-year-old right-hander said. "I think that's a big step, but I think too just being in the big leagues one year longer, everyone has got the experience. We're all so young. I think even if we have the exact same team, we're going to go really far next year."

Some things to know about Tampa Bay's first playoff season in six years:

Despite using a team-record 33 pitchers, the Rays led the AL with a 3.65 ERA. The bullpen was exceptional, leading led the majors with a 3.66 ERA, and the club's starting pitchers ranked second in the AL — fourth overall — at 3.64. Tampa Bay pitchers also finished among the leaders in strikeouts with a club-record 1,621 — third in the majors behind Houston (1,671) and Boston (1,633).

The Rays went 48-33 at home, including 15-2 after Aug. 20. They also won 48 on the road, setting a club record. They were 2-8 at Yankee Stadium against the AL East champions but offset their problems there by going 8-1 at Fenway Park.

The Rays had one of baseball's best records in close games, going 23-16 in one-run games and 11-8 in extra innings. They finished the season with a franchise-best eight-game winning streak in extra-innings games.