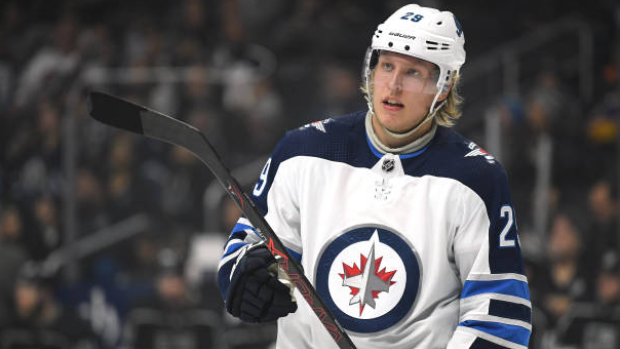 With the regular season on the horizon, we expect to see significant movement on the negotiations front for most of the high-end restricted free agents. That’s precisely what has occurred over the past week or so.

It started when the Toronto Maple Leafs and star winger Mitch Marner agreed to a six-year deal worth $65 million on Sept 13. Other Canadian teams and their respective prized restricted free agents – including Matthew Tkachuk in Calgary and Brock Boeser in Vancouver – have followed suit. Sprinkle in Tampa Bay’s Brayden Point and Philadelphia’s Travis Konecny, and you have an awfully busy week for front offices around the league.

Still, there are a few big names still unsigned, two of which play in Winnipeg. We talked about Patrik Laine and his challenges last week, but the Jets still have to take care of Kyle Connor, too.

In most cases, the changes in the market would have expedited the signings in Winnipeg. Other marquee wingers signing for deals relatively similar in size (save Marner) would naturally help narrow the gap for both the team and player when it comes to expectations. While I think that may be true in the case of Connor, I think the opposite is true for Laine.

Why? The answer has a lot to do with how forwards are historically priced in contract negotiations. It has been proven out over the years that contracts for established players are relatively predictable, and a lot of that is because scoring rates tend to drive contracts. That’s especially true for high-end goal scorers, of which Laine has relatively few peers. Over the last two seasons, Laine’s 74 goals in all situations and 1.6 goals per-60 minutes trump the entire RFA class. (His 119 points and 2.6 points per-60 minutes are in the middle of the pack.)

But the knock on Laine has rarely been about scoring. He is recognized as one of the league’s best shooters – a ridiculous combination of velocity, accuracy and consistency that few other forwards around the league can replicate. The concerns have always centred on what his play looks like when he doesn’t have the puck, both in the offensive zone and when defending the run of play.

This is where Winnipeg is going to dig in. Because the numbers absolutely meet the eye test on Laine – an elite offensive talent who gives an awful lot back defensively and, because of that, the value he has added to Winnipeg over the years has been marginalized. If Laine was planning on using any of the superstar RFA wingers as comparables during negotiations – well, that strategy may not work as intended.

As a matter of housekeeping, let’s take a quick glance at the contracts that have been inked over the last week or so:

It’s a relatively small number of contracts, but we do have two interesting segments between the players who took longer-term extensions and players who took obvious bridge deals. The player with the biggest win was Marner, who will carry one of the league’s biggest cap hits for the foreseeable future. On the other end of the spectrum, I think it’s fair to argue that a player like Brayden Point – who signed a three-year bridge deal – took a relatively more team- friendly contract.

Let’s now think about these contracts with a bit more context, specifically concerning the value the players added to their respective teams in the years leading up to their extension. For an all-encompassing measure I’ll use Evolving Hockey’s Goals Above Replacement measure, which measures individual contributions across all game states.

Over the last two years (I chose two seasons because players like Brock Boeser are entering their third years in 2019-20), Laine has been a value-added presence to the Winnipeg lineup. But he pales in comparison to his peers, predominantly because Winnipeg’s even-strength play with Laine on the ice has been relatively poor.

Despite his brilliant goal scoring, Winnipeg really hasn’t been a dominant team with Laine on the ice at even strength. Something to consider: amongst regular Winnipeg forwards over the last two seasons, Laine is 14th in on-ice goal differential (+0.06 goals per-60 minutes of play). Laine’s argument, as we learned last week, is that he feels bogged down by playing with a centre like Bryan Little as opposed to Mark Scheifele. There may be some truth to that, but the performance just isn’t quite there.

That’s not to rain on Laine’s parade. He is still an absolute force as a goal scorer and most of Winnipeg’s power-play sets run through him, and for good reason – the Jets score 9.9 goals per 60 minutes with him on the ice, which is easily the best number for all Winnipeg regulars. When his power-play unit is on the ice, he scores nearly 40 per cent of the goals. It is a monstrous advantage for Winnipeg when they have the man advantage.

But ultimately this is a math problem. I said earlier that Laine may have an argument as one of the best shooters in the league. He may also have an argument that he’s one of the bigger power-play weapons in the entire league. For every minute he gets on the power play, he gets four at even strength. With a team getting only slightly above- average results with him on the ice at even strength, that’s a real point of contention.

I’m not sure where Winnipeg and Laine will eventually end up, but I do think Winnipeg should feel a bit more empowered to hold the line with their contractual asks. Laine is a great player, but other great players who have delivered more in their short careers are clocking in between $6 million to $7 million annually.

If a bridge deal is realized, I don’t see any way in which the average annual value doesn’t sit at or below that window.

Data via Evolving Hockey and CapFriendly