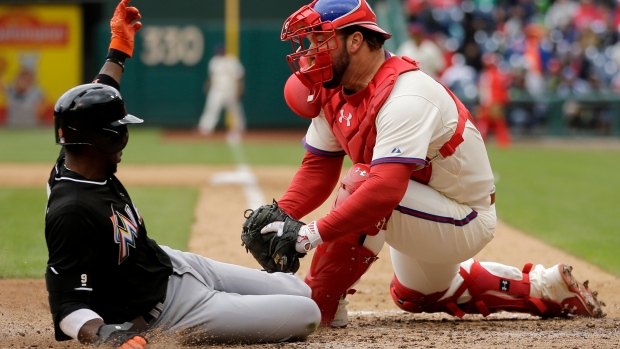 PHILADELPHIA - Poor hitting, sloppy defence and another loss for the Philadelphia Phillies.

At least for fewer people are coming to boo.

The announced crowd of 17,097 that came to see the two worst teams in the NL East on a chilly day was the smallest in the 11-year history of Citizens Bank Park.

"We've got some work to do," manager Ryne Sandberg said. "We've got to tighten up our defence and play smarter. It was not a good game for us."

Fundamentals have been a problem for the Phillies whether it's the inability to bunt, play situational ball or make routine fielding plays.

"It's been frustrating," Sandberg said. "It's a priority. We've got to work on it. It's been disappointing."

Giancarlo Stanton hit a two-run homer and Hechavarria drove in three runs for Miami, which has won two straight games after losing five in a row.

Phelps (1-0) struck out five to earn his first win since joining the Marlins after three seasons with the Yankees. Cesar Hernandez hit a sacrifice fly off Nick Masset in the ninth to end the shutout bid.

Dustin McGowan (0-1) was roughed up in his first start for Philadelphia. He allowed four runs and three hits, walking four in 3 1-3 innings.

"I just didn't have it," McGowan said.

Hechavarria and Prado hit two-run singles in the fourth to give the Marlins a 4-0 lead.

McGowan walked the bases loaded before Hechavarria ended his day with a line-drive single. Reliever Hector Neris hit Phelps with a pitch and after Dee Gordon struck out, Prado bounced a single past third baseman Cody Asche to drive in two more for a 4-0 lead.

Prado hit a two-run double off Justin De Fratus in the sixth. Stanton then lined his fourth homer of the season into the left-field seats.

Darin Ruf hit a career-best two doubles, including one that should've been a homer but was blown way back onto the field and fell in front of Ichiro Suzuki in left field.

"I just wanted to have some good at-bats and make solid contact," Ruf said. "We've been hitting some balls hard right at people. Hopefully that will change soon."

Phillies: McGowan started because RHP Sean O'Sullivan was put on the 15-day disabled list Wednesday because of tendinitis in his left knee.