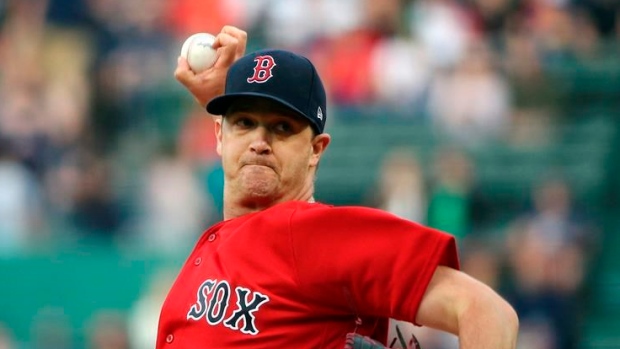 BOSTON — Steven Wright knows that post-season baseball will not be in his future this year.

Wright is ineligible to pitch in the playoffs after testing positive for Growth Hormone Releasing Peptide 2 (GHRP-2) last off-season and serving an 80-game suspension. The 34-year-old right-hander was activated before Tuesday's game against the White Sox despite not seeing any game action since last September.

A former starter who earned an All-Star selection in 2016, Wright will pitch out of the bullpen with hopes of helping to keep the defending champion Red Sox in the playoff picture after an underwhelming start.

"Obviously I think it's going to be hard when the time comes to where the playoffs come around," Wright said. "All I can do now is just try to do whatever I can to help them get there. When the time does come, when the playoffs start, I'll just be a cheerleader."

Wright addressed his teammates before his return to make amends for taking the focus away from the field.

"You don't ever want to be a distraction," he said. "I needed to talk to them and it was probably one of the hardest things I've ever had to do, but guys understood why I had to do it. I just apologized for the distraction."

Wright, who is 24-15 with a 3.77 ERA over six seasons with Boston, did not appear during the team's 2018 post-season run that culminated in the Red Sox's fourth World Series victory since 2004 against the Dodgers.

Although initially on the playoff roster for the team's first-round series against the Yankees, Wright was unable to pitch in the playoffs because of a left knee injury that required off-season surgery.

Wright said his knee "feels good" and that he was able to use his extended time off to get back into baseball shape.

"I had a good training staff down in Fort Myers, (Florida)," Wright said. "We got a lot of work (done). We used the time wisely as far as my knee and getting my body back to where I needed to be."

Wright also served a 15-game suspension last year for violating Major League Baseball's domestic violence policy. He was arrested on Dec. 8, 2017, at his home outside Nashville, and charged with domestic related assault and prevention of a 911 call, both misdemeanours.

The Boston Globe reported prosecutors retired Wright's case contingent on him completing an anger management course, refraining from violent contact with his wife, and incurring no new criminal charges for a year.

Wright's latest suspension cost him about half of his salary of $1,375,000 for this season. He maintains that he did not knowingly take a banned substance.

"With it being such a low amount (of HGH), it could have come from a lot of different things," Wright said. "But it falls on me. I wasn't as careful as I should be, and now I don't take anything. . I haven't really thought about it since then because I really wanted to put it behind and just do everything I can to move forward."

If given the opportunity, Wright would gladly rejoin the starting rotation. Boston's starters have posted a 4.52 ERA this season, which ranks seventh in the American League and 17th in the majors.

"It's one of those things that's unknown. I'd love to sit here and say, 'Yeah, for sure,' but I said that last year and it didn't work out," he said. "I'd rather just do whatever the team needs. Right now, they want me in the bullpen and that's where I'm happy to be."