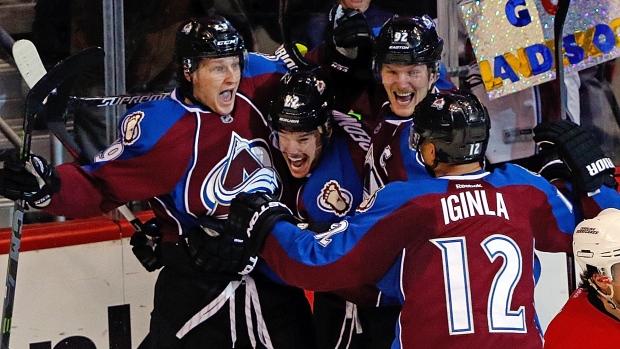 DENVER - The Colorado Avalanche's frantic finish more than made up for a bad first period.

Zach Redmond scored his second goal of the game with 1:35 remaining, and the Avalanche rallied to beat the Carolina Hurricanes 4-3 on Saturday night.

Jarome Iginla had a goal and an assist, and Erik Johnson also scored for the Avalanche, who have won three of four. Calvin Pickard had 17 saves in relief of Reto Berra to earn his first NHL win.

Colorado trailed 3-2 late but controlled play for most of the third period. Iginla tied it 3-3 at 14:43, and Redmond pinched in from the blue line to record his first career multi-goal game.

"The puck was kind of moving down low," Redmond said. "Me and Iggy had talked about it earlier on the power play, me creeping down there. I was able to time it right, and he put a perfect pass on my tape and made it easy for me."

Carolina pulled goalie Cam Ward for an extra skater with a minute left, but couldn't tie it. Ward finished with 31 saves.

Nathan Gerbe, Andrej Nestrasil and John-Michael Liles scored for the Hurricanes, who have lost five of six after a 5-0-1 stretch.

The Hurricanes struggled to score during their recent slide, managing just two goals during a three-game losing streak.

Their offence woke up in the first period, but was silent the rest of the way against the banged-up Avalanche. They had a chance to go up three goals early in the second period but Pickard made a glove save on Alexander Semin's shot from in close and then scooped the puck off the goal line.

"It's 3-1 and the puck is on the goal line, and Sems has a shot there," Carolina coach Bill Peters said. "Maybe it goes to 4-1 and it turns out different."

Colorado's injury woes forced the Avalanche to recall an entire line from Lake Erie of the AHL.

Tomas Vincour, Andrew Agozzino and Ben Street made their debuts after the team was hit hard by injuries. Dennis Everberg (separated shoulder) and Alex Tanguay (facial fracture) were hurt on Thursday. Jamie McGinn is battling back pain, and John Mitchell sustained a leg injury in practice on Friday.

That is on top of the injury to No. 1 goalie Semyon Varlamov, who is out because of a groin strain. Berra struggled in his second straight start and gave way to Pickard after allowing three goals on 10 shots.

Pickard's performance helped prevent Carolina from getting its first win in Denver. The last time the franchise won here was Feb. 9, 1996, when the team was the Hartford Whalers.

"He stood on his head," Redmond said of Pickard.

The Hurricanes looked like they would end the drought with a big first period. Liles beat Berra 3:48 in, and Gerbe made it 2-0 just 82 seconds later with a shot through traffic.

It was Liles' first goal of the season, and it came in his first game against his former team.

"It was pretty emotional," said Liles, who was with the Avalanche from 2004-11. "A lot of friends, a lot of good memories and it's a different feeling on this side. It would have been nice to get the win along with the goal, but it was still a nice feeling coming back to this building and getting the start from Coach, too."

Colorado got some life when Redmond scored midway through the first. His centring pass to Agozzino went off the skate of Carolina defenceman Andrej Sekera and past Ward to cut the lead in half.

Nestrasil chased Berra with a soft goal to the short side at 16:50 of the first to put the Hurricanes ahead 3-1.

Johnson cut the lead to one with his fourth goal at 8:25 of the second period. His shot from the left circle beat Ward 2 seconds after the Avalanche's second power play expired.

NOTES: Carolina D Brett Bellemore left the game in the first period after being checked into the boards by Colorado RW Cody McLeod. He didn't return. ... The Avalanche placed Everberg, McGinn (back) and D Brad Stuart (hamstring) on the injured list. ... Liles is 15th in Avalanche history with 275 points. ... Tanguay could return to action as soon as Tuesday. Mitchell is out indefinitely.