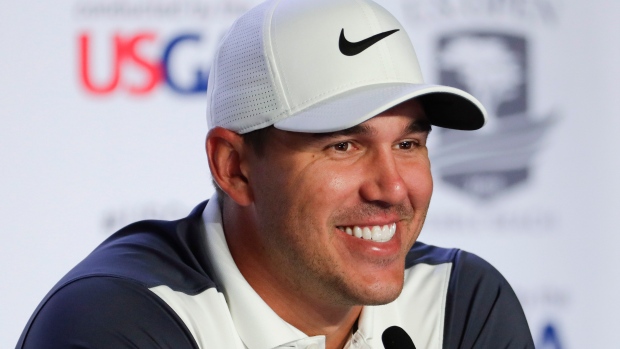 MONTEREY, CALIF. – Last week, during the RBC Canadian Open, Brooks Koepka was in a gym in Hamilton, doing one of his muscle-ripping workouts. A guy sitting on a bench next to him was talking out loud to his pals about how cool it was that a PGA Tour pro was in his gym, pumping iron and getting fit.

The problem was, the golfer being discussed wasn’t Koepka, it was Dustin Johnson, who’d just left the facility. Rather than getting all the attention, the four-time major winner was doing his presses in complete anonymity.

“I don’t know if he was just trying to get my attention or what,” laughed Koepka, “but he talked about Dustin for about 10 minutes to anybody within earshot.”

Remarkably, that’s not the first time Koepka has had to wallow in Johnson’s shadow at a gym. On another occasion, the two players were working out together. A woman approached and was excited to see Johnson in her gym.

And Koepka? She asked him to take a picture of her and DJ together, oblivious as to who was pressing the shutter.

Despite winning four of the last eight major titles he’s played, the strapping golfer remains somewhat of an anonymous figure. He doesn’t have the cache of Phil Mickelson or the presence of Tiger Woods. Yet he’s currently the top-ranked golfer in the world.

This week, he’ll go for a third straight U.S. Open title here at Pebble Beach, something that hasn’t been achieved at this tournament since 1904. The last time it was done in any major was more than 50 years ago.

For example, when host broadcaster Fox released a promo commercial for the championship, there were no shots of Koepka included.

“They've had over a year to kind of put it out. So I don’t know. Somebody probably got fired over it or should.”

Those who know Koepka will tell you he’s an engaging, funny and personable guy. He’s aware that part of the problem lies with him and has made an effort to open up via social media, to show off more of his personal side. That included having fun by posting a picture of him wearing a thong-style bathing suit during a vacation in the Maldives.

And this week, he did a short clip with announcer Joe Buck who famously mis-identified Koepka’s girlfriend during his first U.S. Open victory. On the video, he refers to Buck as “my good buddy Jim.”

It’s still a work in progress and to some fans he can come across as stoic and possibly even pompous.

Some of that image is due to the 29-year-old’s difficulty in accepting his position as a star athlete.

“I view myself completely differently than people view me,” he said. “I still think it’s weird when I walk into a place and I can see eyes are on me just for dinner. And I’m like, ‘What's everybody staring at?’

“I just view myself as a regular guy, just like everybody else. And I just happen to be really good at golf, and that’s it. I don't view myself any different than anybody else does. I'm just a regular guy. That's how I’d like to be treated. I don't want to be put up on a – I don’t want to say a pedestal or anything like that, but I just want to be just like everybody else, just a normal person.”

Johnson considers Koepka one of his best friends. He practices with him, hangs out with him and has gone on vacations together with their significant others. He says most people base their decisions solely on what they see on the course and that’s a very limited way in which to judge someone.

“What people don’t realize is we’re out here on the golf course,” said Johnson. “Yes, they're watching, but we're out here, this is our job. It's our livelihood. So, yeah, we're focused and we're still trying to have fun, but there's a line between having too much fun and not being focused.”

Koepka will undoubtedly put on his game face once Thursday rolls around. His ability to shut out all the distractions and stick to a plan is what’s earned him four majors. And a fifth, not to mention a third consecutive American title, is within grasp, he believes.

“I want to play well,” he stated. “This would be the coolest thing, to win three in a row and to win a third one at Pebble, I think that's really – it’s such a special place. And … as a little kid you always wanted to play a U.S. Open at Pebble. It's kind of a dream come true, in a sense. And to even be thought of or to think of winning a major championship here would be incredible.

Perhaps then, he might even get recognized in the gym.