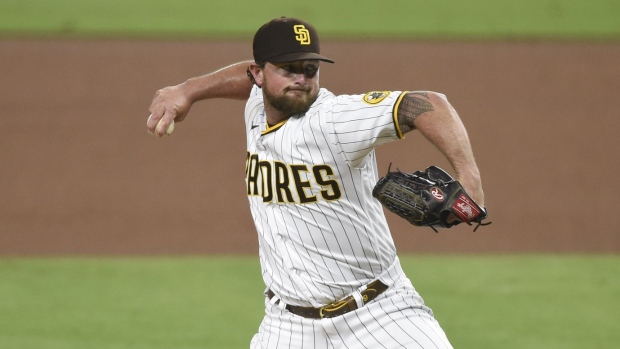 It appears the off-season is getting busier for the Toronto Blue Jays.

Free agent reliever Kirby Yates is firmly on #BlueJays radar, per source.
Yates, who had surgery on right elbow in August to remove bone chips, is expected to be in Dunedin today and I’m told he’s not just “visiting.”

Mitchell adds that the former San Diego Padre is expected to be in Dunedin on Tuesday.

The Athletic's Ken Rosenthal reports the Jays are a finalist for Yates but "no deal is currently in place."

Blue Jays are a finalist for free-agent reliever Kirby Yates, but no deal is currently in place, a source tells The Athletic. On it: @JonHeyman.

It was a rough 2020 for Yates, who pitched in just six games and had an ERA of 12.46. He had surgery in his right elbow to remove bone chips and did not appear in a game after Aug. 14.

The 33-year-old has also spent time with the Los Angeles Angels, New York Yankees and Tampa Bay Rays over the course of his seven-year big league career. He is listed at No. 30 on TSN's Top 50 MLB Free Agents list.