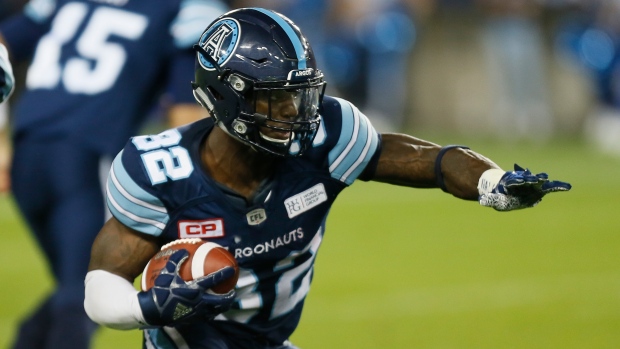 Toronto Argonauts running back James Wilder Jr. has decided to sit out the 2018 CFL season.

The CFL's top rookie last season issued a statement Wednesday saying he's received interest from "several NFL teams" this off-season. Wilder Jr., who's under contract with Toronto through the '18 campaign, said he's reached out to the Argos several times but they're unwilling to allow him to pursue those opportunities so he'll skip playing in Canada this season to safeguard against a potential "career-ending injury."

"It's a decision I've prayed on while speaking at length with the people closest to me, including my mentors," Wilder said. "I wish it could be different.

"I don't want to put my football dreams aside but as a father of four, playing for $56,000 Canadian (about US$45,000) without any potential protection from career-ending injury isn't enough to give my family comfort."

Wilder Jr. added the Argos weren't willing to re-do his CFL deal "to reflect the value I believe I bring to the team."

TSN's Dave Naylor notes that some teams provide an NFL window for players on a case-by-case basis, but not everyone receives it. Argonauts general manager Jim Popp said that if NFL teams have been expressing interest in Wilder, then they are in violation of an agreement between the CFL and the NFL because he in under contract.

With NFL window taken out, some teams now provide it for some players on case-by-case basis. So fans are confused, players don’t understand why some guys are allowed to be released from contracts, some are not. League needs to bring back NFL Window rule. #CFL #Argos

Argos GM Jim Popp says if NFL teams have been expressing interest in @IAm_Wilder32 then they are in violation of agreement between CFL and NFL because he is under contract. #CFL #Argos

The following week, the former Florida State star rushed for 141 yards and a touchdown on 10 carries and had six receptions for 77 yards in a 33-19 victory over the Montreal Alouettes.

After being named the CFL's top rookie, Wilder Jr. capped his season by helping Toronto beat Calgary 27-24 in the Grey Cup game at TD Place in Ottawa.

After helping the Seminoles win an American college football title, Wilder Jr. entered the '14 NFL draft as a junior but was bypassed. He spent time with the Cincinnati Bengals (2014-15) and Buffalo Bills (2016) before signing with Toronto.

Wilder Jr. concluded his statement by thanking CFL fans, his Argos teammates and coaches as well as the organization's front office.

"This isn't the end of my football career just a business decision for my family, a minor setback in advance of a major comeback," he said. "I hope my decision can be respected and Gold bless you all."