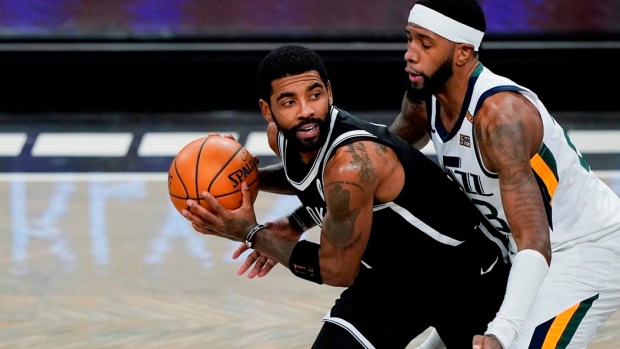 It appears Kyrie Irving's return to the Brooklyn Nets lineup will have to wait another night as he will miss Monday's game against the Milwaukee Bucks.

However, ESPN's Adrian Wojnarowski reports the 28-year-old is ramping up his conditioning and says his return will likely happen either on Wednesday or Friday when the Nets are in Cleveland to battle the Cavaliers.

This will be the seventh consecutive game Irving has missed since January 5. https://t.co/0laEEZehL1

So Irving's return to the Nets and debut alongside Kevin Durant and James Harden likely comes with Wednesday and Friday games in Cleveland. Irving has only returned to play once there since his trade to Boston in the summer of 2017 -- on opening night in October of that season.

It will mark the seventh straight game Irving has missed. The first five games were due to personal reasons while Saturday's game against the Orlando Magic was due to health and safety protocols.

On Friday, the NBA fined Irving $50,000 for violating the league's health and safety protocols after a video appeared of him at a birthday party without wearing a mask.