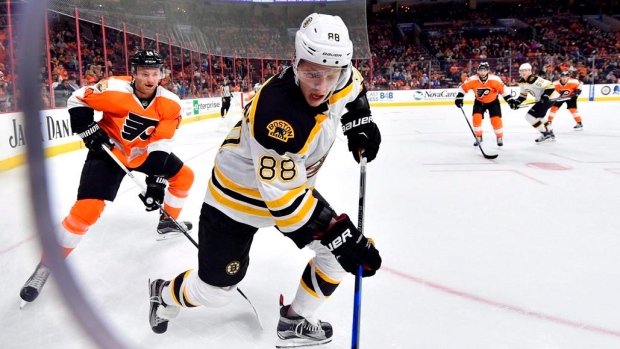 The Boston Bruins have offered restricted free-agent David Pastrnak a long-term contract with an average annual value of $6 million, according to Kevin Paul Dupont of the Boston Globe.

Dupont reports the Bruins have given Pastrnak the option to select either six or seven years as the term if he agrees to the salary.

In 75 games last season, the 21-year-old Pastrnak exploded for 34 goals and 36 assists. He trailed only Brad Marchand (39) for the team-lead in goals. He added two goals and two assists in six playoff games, while averaging over 21 minutes of ice time per contest.

At $6 million per season, Pastrnak's salary would be equal to 2016 free-agent signee David Backes, tied for fourth among Bruins forwards, behind Marchand ($6.125 million), Patrice Bergeron ($6.875 million), and David Krejci ($7.25 million).

Pastrnak is the lone remaining restricted free agent on the Bruins, who currently have $10.15 million in cap space remaining for the 2017-18 season, according to CapFriendly.

Haggerty: Pastrnak is a direct comparable to Draisaitl

Bruins general manager Don Sweeney said talks with Pastrnak were "in a holding a pattern" earlier this summer, but later shut down any trade rumours despite the standoff.

Pastrnak was taken at No. 25 overall in the first round of the 2014 NHL Entry Draft by the Bruins, making his debut later that season. He was one of two players from the 2014 draft to play in 40 or more games in the same season, appearing in a total of 46 games. The other was No. 1 overall pick Aaron Ekblad.