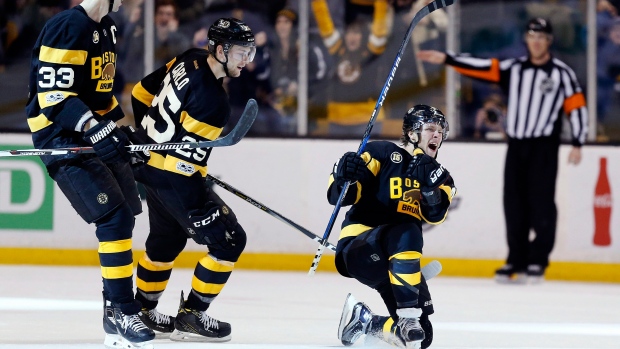 Don Sweeney has no plans to trade David Pastrnak.

The Boston Bruins general manager dismissed speculation from this week that the team could deal the winger, who is a restricted free agent.

"Not trading Pastrnak," Sweeney wrote in an email to The Boston Globe on Monday.

The Bruins and Pastrnak have yet to reach a contract extension this summer. Sweeney told The Boston Herald at the end of July that the two sides were in a holding pattern in negotiations.

With what I am hearing I would not be surprised if David Pasternak @NHLBruins is traded. #contractproblems @NHLNetwork

In 75 games last season, Pastrnak, 21, exploded for 34 goals and 36 assists. He trailed only Brad Marchand (39) for the team-lead in goals. He added two goals and two assists in six playoff games, while averaging over 21 minutes of ice time per contest.

Joe Haggerty of CSN New England wrote Monday in reaction to the speculation that he did not believe the Bruins will part with Pastrnak, but sees the two sides getting antsy with one month left before training camp.

Haggerty added that the Bruins and Pastrnak were close to signing a deal that was slightly cheaper and shorter than Marchand's eight-year, $49 million contract, but then Connor McDavid and Evgeny Kuznetsov elevated Pastrnak's value with their deals this summer.

Kuznetsov, who scored 19 goals and 59 points last season, signed an eight-year, $62.4 million contract in July, while McDavid signed an extension that will pay him $12.5 million per year starting in 2018.

Pastrnak is the lone remaining restricted free-agent on the Bruins, who currently have $10.15 million in cap space remaining for the 2017-18 season, according to CapFriendly. David Krejci is currently the team's highest-paid player with a $7.25 million cap hit.

Pastrnak was taken at No. 25 overall in the first round of the 2014 NHL Entry Draft by the Bruins, making his debut later that season. He was one of two players from the 2014 draft to play in 40 or more games in the same season, appearing a total of 46 games. The other was No. 1 overall pick Aaron Ekblad.

Pastrnak is the lone remaining restricted free-agent on the Bruins, who currently have $10.15 million in cap space remaining for the 2017-18 season, according to CapFriendly.